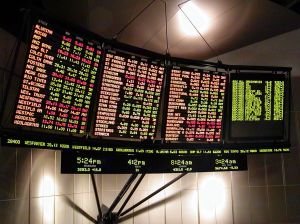 New York, NY - March 18, 2014 - Attorney General Eric T. Schneiderman today called for tougher regulations and market reforms intended to eliminate the unfair advantages commonly provided to high-frequency trading firms at the expense of other investors. During remarks at a symposium hosted by New York Law School – “Insider Trading 2.0 – A New Initiative to Crack Down on Predatory Practices” – Attorney General Schneiderman detailed a number of services that trading venues offer to high-frequency traders and the damaging impact of those services on the rest of the market.
Those services, which in the hands of predatory high-frequency traders distort our markets, include, for example: allowing traders to locate their computer servers within trading venues themselves; providing extra network bandwidth to high-frequency traders; and attaching ultra-fast connection cables and special high-speed switches to their servers. Each of these services offers clients a timing advantage – often in milliseconds – that allows high-frequency traders to make rapid and often risk-free trades before the rest of the market can react. As a result, these traders guarantee themselves enormous revenue and force large investors to develop complicated and expensive defensive strategies to conceal their orders from parasitic traders.
“Rather than curbing the worst threats posed by high-frequency traders, our markets are becoming too focused on catering to them,” said Attorney General Schneiderman. “I am committed to cracking down on fundamentally unfair – and potentially illegal – arrangements that give elite groups of traders early access to market-moving information at the expense of the rest of the market.  We call it Insider Trading 2.0, and it is one of the greatest threats to public confidence in the markets.  It’s long past time that we focus on structural reforms to help eliminate the unfair advantages enjoyed by high-frequency traders.”
Currently, these services primarily benefit high-frequency traders, because only they can maximize their value by means of the unique strategies employed by high-frequency traders.
These special services, and the exchanges – large and small – that enable them, make these advantages possible. In the tiny sliver of time offered by these products, high-frequency firms obtain a first look at direct-data feeds provided by trading venues. These feeds include pricing, volume, trade, and order information, and the firms use sophisticated technology to trade on it before others can possibly react.  For instance, high-frequency traders look for arbitrage opportunities between and among the various exchanges, moving on price and order information before the rest of the market is even able to digest it -- all in order to capture momentary differences in stock prices. Co-location arrangements also help high-frequency firms to continuously monitor all the exchanges for large incoming orders.  If a firm can detect a large order from an institutional investor – like a pension fund – it can instantaneously position itself on the other side of the trade, driving up the prices artificially.
This has forced large, institutional investors to develop complicated and expensive defensive strategies in order to conceal their legitimate orders from parasitic traders -- including the routing of orders into alternative trading venues.  These alternative venues, or “dark pools,” are less regulated, have fewer reporting requirements, and are far less transparent.
To address this imbalance in the markets, which now tilt in favor of high-frequency traders, Attorney General Schneiderman today called on the exchanges and other regulators to review the feasibility of certain market structure reforms that could help eliminate some of the fundamental unfairness in our markets. Currently, securities are traded continuously, so that orders are accepted and matched by price, with ties broken by which order arrives first. This system emphasizes speed over price, rewarding high-frequency traders for flooding the market with orders. One detailed proposal would seek to correct this imbalance by processing orders in batches in frequent intervals, to ensure that price – not speed – is the deciding factor in who obtains a trade.
Today’s speech is part of the Attorney General’s broader initiative, launched last year, looking into the unfair advantage provided to elite and technologically sophisticated market players at the expense of others.  Last fall, the Attorney General announced that his office had secured an interim agreement with financial information giant Thomson Reuters to discontinue its practice of selling high-frequency traders a two-second sneak peek at certain market-moving consumer survey results. Prior to that agreement, Thomson Reuters was selling early access to results of the University of Michigan Survey of Consumers, one of the most closely watched indicators of consumer sentiment in the United States. The Attorney General's investigation into the scope and impact of this practice is ongoing.
And just last month, Attorney General Schneiderman announced interim agreements with a number of prominent financial firms to stop their practice of cooperating with analyst surveys administered by certain elite, technologically sophisticated clients at the expense of others—a practice that can put other investors at an unfair disadvantage
The agreements followed a groundbreaking settlement with BlackRock, the world’s largest asset manager, to end its practice of systematically surveying Wall Street analysts for their opinions on firms they cover.  At that time, the Attorney General announced that his investigation would continue into those firms that answered surveys.
Since federal and state regulators face many challenges in tracking and preventing these new forms of Insider Trading 2.0, the Office of the Attorney General has established a hotline for financial industry insiders to confidentially report improper or illegal conduct.  Confidential witnesses have already come forward and offered substantial help with this effort.  Anyone else who knows of front-running schemes, efforts to trade in illicitly gained confidential information, or firms selling early access to market-moving data is asked to call 800-771-7755.