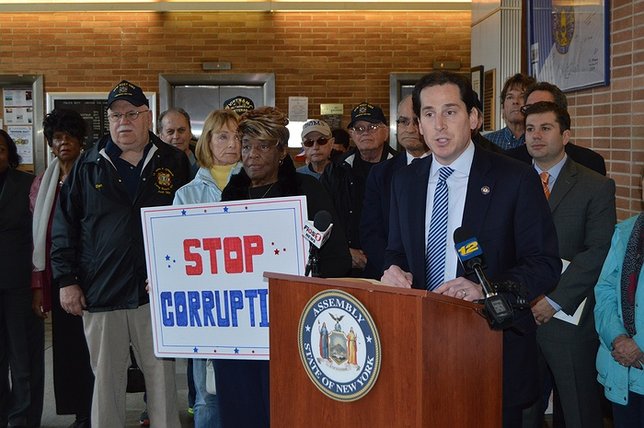 Kaminsky’s package of targeted legislation, “Restoring New Yorkers’ Trust”, includes provisions to criminalize corruption and increase its penalties at the state level, as well as laws to empower District Attorneys to root out and prosecute corrupt public officials like former Sen. Dean Skelos, locally. Kaminsky said today that his plan for cleaning up government came from his experience as a federal prosecutor, when he successfully prosecuted corrupt Democrat and Republican politicians, including former Senate Majority Leader Pedro Espada, and former Assemblymen Jimmy Meng, among others.

“As a federal corruption prosecutor, I saw first-hand how dirty politicians abused their power by exploiting weak laws that allowed their corruption to go unchecked for long periods of time,” said Assemblyman Kaminsky. “Our penalties in New York must be much stronger to deter corruption. We must also empower our District Attorneys to find corruption, stop dirty politicians in their tracks, and punish their crimes. We cannot rely on the federal government to clean up New York.

“There is a real cost to corruption when public officials put themselves before taxpayers – whether the dirty politician is a senate leader or a local legislator – and we can’t afford to allow the corrupt to get away with fleecing New Yorkers for years before stopping them. We must stop corruption wherever it is, whenever it is, as fast as we can to protect our tax dollars and our democracy. We need more cops on the beat with the weapons to fight back. We cannot let another Dean Skelos get away with stealing from taxpayers for as long as he did.”

Specifically, Kaminsky announced two bills to advance the fight against corruption, and reiterated his call for convicted public officials to lose their state pensions.  Kaminsky's first piece of legislation creates criminal charges for “abuse of the public trust”, which will allow for additional charges to be added against those who commit felonies, and then use their official position to conceal the crimes they have committed.

The bill also lowers the threshold for bribery charges, and reforms the bribery statute to enable local prosecutors to more fairly apply the law to public officials by adding “intent to influence” provisions.  Kaminsky’s second bill empowers District Attorneys by making it a crime for anyone to knowingly give false statements to a district attorney or their lieutenants.  Kaminsky also renewed his call for pension forfeiture legislation to be enacted this session.

“Politicians found guilty of violating the public’s trust should not be rewarded for their bad behavior by receiving their public pensions,” said VFW Post 1384 Commander Dan MacPhee. “I am proud to support Assemblyman Kaminsky in his efforts to eradicate corruption from Albany.”

“Our City administration has a zero tolerance policy when it comes to violating the public trust,” said Long Beach City Manager Jack Schnirman.

“We wholeheartedly support any legislation that will crack down on those who abuse the public trust," said City Councilman Scott J. Mandel. “Any public officer who is convicted on corruption charges should not be eligible to receive a public pension.”