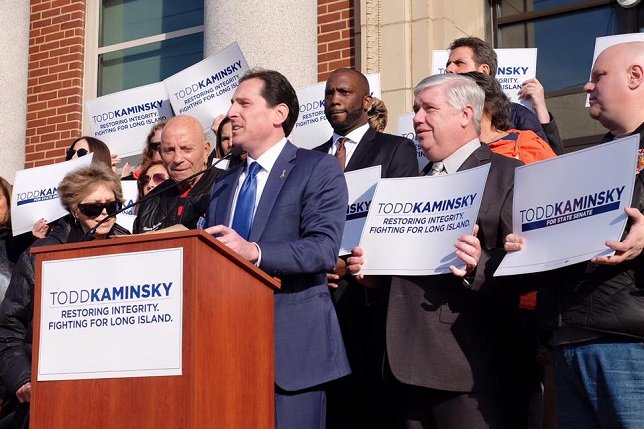 South Shore, NY - January 31, 2016 - Surrounded by neighbors, family and supporters, former federal prosecutor Assemblyman Todd Kaminsky announced today his candidacy to replace Dean Skelos in the New York State Senate. A lifelong fighter for integrity in politics and for the residents of his native South Shore, Kaminsky pledged to clean up Albany and stand up for Long Island.

As the former lead prosecutor of the federal government’s local public corruption unit, Kaminsky won big cases against corrupt Democrats and Republicans before his election to the State Assembly. Since then, Kaminsky has delivered results for Long Island, winning tax relief for Sandy victims, significantly increasing education funding for the South Shore, and passing reforms to hold Albany lawmakers accountable.

“As a corruption prosecutor, I was proud of the work I did, successfully convicting both Democrats and Republicans for violating the public’s trust. But, as we’ve seen in our own community, the corruption continues,” Kaminsky said at his announcement. “We must return our government to where it belongs -- into the hands of the people -- so that it will deliver the results Long Island deserves.

“We are at a pivotal moment for Long Island and for New York. If we don’t fix what’s wrong with our government, we will not be able to fix what’s wrong with our cities, villages and towns. Today is when we start. Today we stand together to bring integrity back to Albany, to take our government back, and to make it work for Long Islanders. Today I announce my candidacy for the State Senate.”

The 9th Senate District seat became automatically vacant upon Skelos’s conviction in December on charges of bribery, extortion and conspiracy. The Nassau County Democrats chose Kaminsky as their preference for the seat on January 5.

A committee to help elect Kaminsky to the Senate opened earlier this month, and raised more than $250,000 in less than one week. Kaminsky also reported two weeks ago that he already had more than $332,000 on-hand for a Senate race.