Senior U.S. Senator from NY endorses former Asst. U.S. Attorney Kaminsky: “Todd will be a dynamic leader for his constituents and all New Yorkers.” 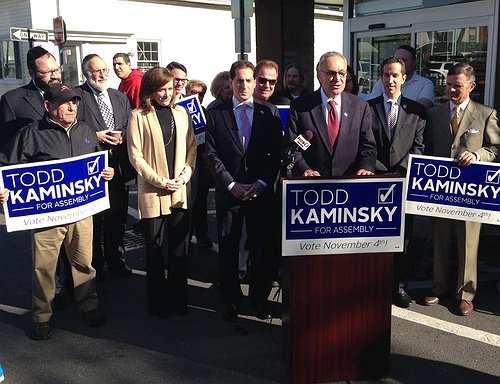 “Todd Kaminsky is exactly the kind of talented, dedicated public servant we need in Albany,” Sen. Schumer said. “As a federal prosecutor, he proved himself to be a relentless defender of New Yorkers—successfully prosecuting scam artists, drug kingpins and corrupt government officials. As a community advocate, he volunteered countless hours helping his neighbors on the South Shore after Hurricane Sandy, and dedicated himself to improving the area where he grew up.

“I strongly endorse Todd Kaminsky for Assembly; Todd will be a dynamic leader for his constituents—and all New Yorkers.”

“I am truly humbled to have the endorsement of Sen. Schumer,” Kaminsky said. “It is an honor to have the support of a leader who has dedicated his life to public service, and so effectively represented New York – especially Long Island – for so long. His is an example I will follow in the Assembly.”
Assemblyman Phil Goldfeder and Nassau County District Attorney Kathleen Rice were also in attendance.

The 20th Assembly District includes all or parts of Atlantic Beach, Long Beach, Lido Beach, Island Park, Oceanside and the Five Towns, including Woodmere, Lawrence, Cedarhurst, Inwood and the Hewletts. Current Assemblyman Harvey Weisenberg is retiring at the end of 2014.

About Todd Kaminsky
Todd Kaminsky has brought some of New York’s worst criminals to justice, and advocated tirelessly for Long Island’s South Shore.

As a federal prosecutor representing Long Island, Brooklyn and Queens, and as acting deputy chief of the Public Integrity Section, Todd took down corrupt elected officials who used taxpayer dollars to fund lavish lifestyles, as well as drug kingpins and other major felons.

Todd began his career as a prosecutor in the Queens District Attorney’s office, prosecuting domestic violence cases, robberies, shootings and other violent crimes.

As a community advocate, Todd has worked vigorously in support of the South Shore. He organized free legal clinics for those affected by Hurricane Sandy, and helped bring tens-of-thousands of dollars in relief funds to local residents. For his efforts, Todd was awarded the Community Service Award from the U.S. Attorney's Office for the Eastern District of New York and the Long Beach Martin Luther King Center’s Sandy Relief Service Award.

Todd’s commitment to public service is inspired by his grandparents, who collectively served 40 years on the Long Beach Board of Education. His mother and grandmother were also teachers in the Long Beach School District.

Todd and his wife, Ellen, have been married since 2010. They live in Long Beach, where he grew up.