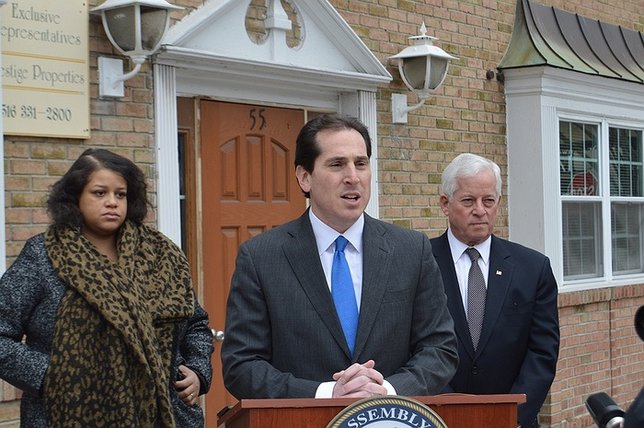 The lack of appropriate vetting for local contracts allowed Dean Skelos to manipulate the Nassau County contracting system, misappropriating taxpayer money in order to enrich his son, Adam. Due to a lack of mandated oversight, there is still no system in place that would flag a questionable and unnecessary contract such as the one arranged for by Adam and Dean Skelos on behalf of AbTech Industries.

Kaminsky’s bill, which mirrors a plan already introduced in the State Senate, would force all municipalities to create a vendor responsibility system and fully vet all contracts over $10,000.

In the Assembly, Kaminsky and Lavine will push to require local governments to use systems similar to New York City’s Vendex system—an electronic database designed to create maximum transparency in the city’s contracting process in order to prevent corruption and the misappropriation of taxpayer money.

At Wednesday’s press conference, Kaminsky said: “It is our responsibility to ensure that the scam pulled by Dean and Adam Skelos is virtually impossible to get away with ever again in New York. As a former federal corruption prosecutor, I took down politicians for manipulating and abusing government contracting practices - and it is clear to me that, by simply shining some sunlight, we can prevent the corruption in the first place. It is time to end this era of graft, when a vendor can get a government contract through a no-bid, fixed, and corrupt process. This plan will save taxpayers money and ensure that Long Island families are never again the victims of a crooked politician’s abuse of power.”

“The current process by which municipalities award contracts is undermining our democracy at every level,” said Assemblyman Charles Lavine.  “We can’t open our local newspapers without reading about a contract that was awarded to some political insider with no oversight. This bill will ensure that all municipalities have a system in place to make the contract awarding process more transparent and fair.”

“Fraud and waste must be eliminated from the municipal contracting system,” stated Assemblywoman Michaelle C. Solages.

“This legislation will prevent individuals from having political influence over the contracting process as well as facilitate a streamlined approach to the various phases of contracting. This will provide taxpayers with public transparency and accountability. I commend Assemblyman Todd Kaminsky for taking a bold step towards changing the culture of municipal procurement.”