Southampton Chamber of Commerce: Update on Repaving of Main Street In Hampton Bays

On February 11, 2015, the County held an informational meeting regarding the County's project to repave Main Street from the HB Diner to the Canal. 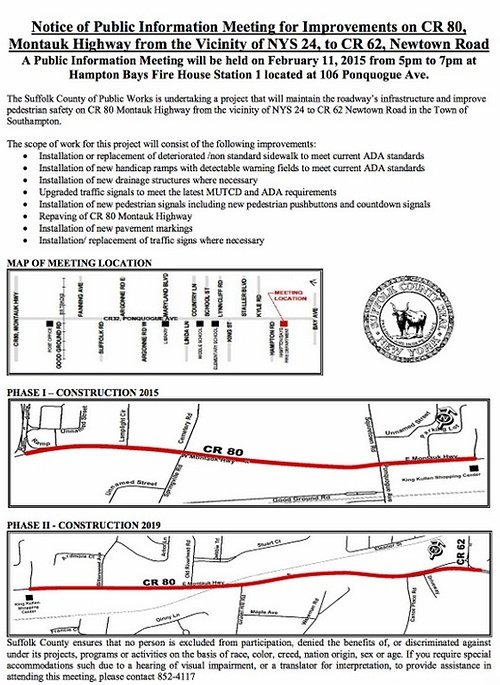 Hampton Bays, NY - February 17, 2015 - On February 11, 2015, the County held an informational meeting regarding the County's project to repave Main Street from the HB Diner to the Canal.  Your Board Member, Christie Pfeil, attended the meeting and is sharing the information below.  If you have questions or comments, there is a comment sheet and contact information below.

This project started as a $600,000 repavement of Main Street.  There were not county funds to cover the repaving, so Assemblyman, Fred Thiele worked to secure $600,000 in state funds and those funds are currently in the final approval stage.  The repaving project opened a whole new can of worms with new ADA regulations.  Repaving the road will also now include repaired sidewalks, new ramps, replaced traffic signals and updated and new signage, increasing the project from $600,000 to $1.5 M.  The State will cover $600,000 and the Town of Southampton will cover the rest.

The bidding process will begin in March or April.  County Executive Bellone said he would expedite the process as much as possible, but this will still leave us around Mid-May for a start date if we start right away. The total project will take 3-6 months to complete and will cause major disruption to main street if done between Memorial Day and Labor Day.  Also, the town park is set to begin work this spring and will take about a year until completion which would add large trucks and equipment going up and down Main Street.

After all things considered, it was decided that the best option to minimize the strain on our local merchants would be to begin the sidewalk work (including curbs, drainage, and traffic signals) right after Labor Day 2015 and complete this phase by October.  All work would be done during the day due to temperature requirements.  Each Main Street business should expect to have 1-2 days of the work taking place directly in front of their business, but provisions will be made so that patrons will still be able to enter.  Phase II - Roadwork (including milling, scraping and repaving) would take place April 2016 and would be complete prior to Memorial Day 2016. This work would be done at night since temps would allow this time of year and Main Street would be closed to thru traffic 10pm-6am Sunday through Thursday until the roadwork is complete.

Although this project will take longer than originally expected, the scope is much more involved than just repaving the road, which will give a heightened and improved look to the signage and sidewalks on Main Street.

There is a 2-week period for any questions or concerns to be voiced by the residents/business owners.  Attached is a comment sheet.  Questions or Concerns can be given on this form and the form can be sent to Suffolk County by February 25 via fax, mail/dropoff, or email.  The contact methods are 335 Yaphank Ave, Yaphank, NY  11980 (Attn: Russ Mackey);rmackey@suffolkcountyny.gov; or Fax: 631-852-4006 (Attn Russ Mackey)