A local radio host and his co-host have been taken off the air after fabricating a story about a fictitious mother’s response to a birthday party invitation for her son. 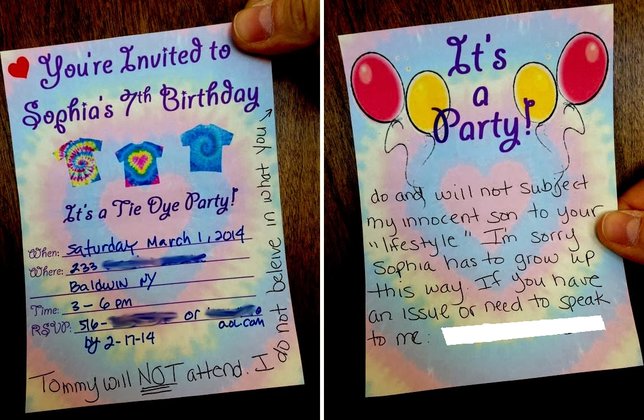 Steve Harper and his co-host Leeana Karlson of Farmingdale-based K-98.3’s “Morning Show” were suspended by the radio station on Sunday, February 16 after fabricating a story about a mother rejecting an invitation sent to her son for his classmate’s birthday party because the parents of the seven-year-old were gay.

An image that appeared on the station’s Facebook page on Wednesday, February 12 depicted an invitation to a tie-dye themed party for a girl named Sophia in Baldwin. In response, the mother of the invited boy scribbled a note on the card rejecting the invitation and decrying the non-existent girl’s parents for being homosexual.

“Tommy will NOT attend,” the response read. “I do not believe in what you do and will not subject my innocent son to your ‘lifestyle.’ I’m sorry Sophia has to grow up this way. If you have an issue or need to speak to me [phone number redacted].”

After the story took off and “Tommy’s mother” received some harsh criticism on K-98.3’s Facebook page, the Morning Show hosts admitted to having made the whole situation up.

“This story was, in fact, totally fictitious, and created by the two of us. This was done without the knowledge of K-98.3 management or ownership,” the duo wrote in a message posted to the station’s website. “We were attempting to spur a healthy discourse on a highly passionate topic, but we made a mistake by misleading our listeners into thinking that this specific situation actually existed.”

Following an internal investigation, K-98.3 announced that it would suspend Steve Harper and Leeana Karlson, though it did not say how long the suspensions would last.

“In an effort to move forward, K-98.3 has been speaking with local community organizations, such as the Long Island GLBT Services Network, to ensure the fabricated story does not result in further damages with respect to the GLBT community,” the station said in a statement posted to its Facebook page.

“We applaud the quick and decisive actions from the management team at K-98.3 FM,” added David Kilmnick, CEO of the Long Island GLBT Services Network. “While we don’t agree with how the information was presented by Steve and Leeana, we do recognize the impact and importance of fostering discussions of this important and sensitive social issue. I look forward to continuing this discussion on the K-98.3 Morning Show with Steve and Leeana upon their return.”

For additional information about LGBTQ youth on Long Island, visit LICC’s Pride for Youth; to donate to the organization click here.