I-Con Science Fiction Convention Not A Possibility For 2013 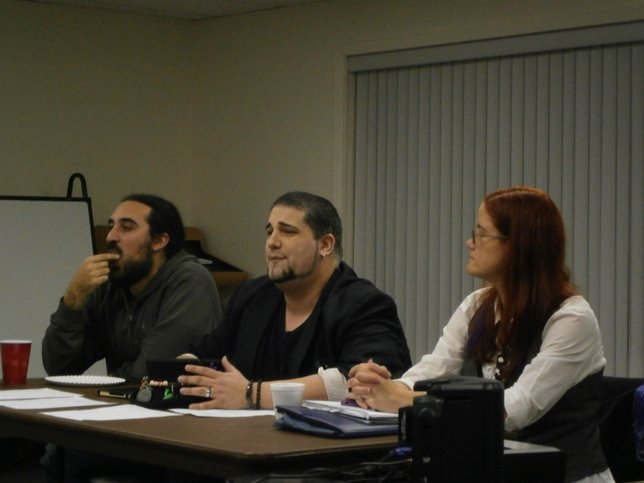 The end of March/beginning of April marks a special time for Long Islanders who are fans of science fiction, video games, comic books and literature. That’s the time of year usually dedicated to I-Con, typically hosted at Stony Brook University, the I-Con Science Fiction Convention is a weekend of fun and silliness, with people sporting homemade costumes to look like their favorite superhero, Star Wars or whatever other type of fandom and a myriad of panels and discussions hosted by authors, media guests and experts. With programming ranging from model rocket launches to late-night horror movie marathons, the convention aims to offer a bit of everything to its attendees.

The initial statement courtesy of a post on the I-Con website stated “The factors leading to this decision include financial difficulties, challenges in moving a convention our size, and most notably repercussions of Hurricane Sandy and the nor'easter that followed shortly after.” Unfortunately, for many looking forward to this year’s event, I-Con appeared to be yet another victim of Hurricane Sandy. While the Sandy excuse first appeared to be a smokescreen provided by convention organizers, this past week, the president of the convention, along with members of the staff held a meeting in Glen Head to discuss the convention’s monetary and planning troubles head-on.

“Everyone is aware that we lost Stony Brook this year, as well as for the next three years as a potential venue. With that said, I-Con has traditionally been the recipient of a sweetheart deal, and for 31 years, Stony Brook has made it easy for us to hold the event on their campus,” said Vince Collura, president of I-Con Science Fiction. “Most of the costs of the convention are due at or after the convention. This worked well with how the convention’s previous business model, where we’d make our money in a three-day period of time.”

Collura explained that no other venue would operate in such a way. While some in attendance of the meeting referenced the rumors that I-Con had burned its bridges with Stony Brook University, staffers and organizers were quick to correct that, stating that Stony Brook even attempted to help the convention by allowing the use of other facilities on-campus. The real reason I-Con won’t be at Stony Brook University for the next three years or so is due to the massive construction going on at the Indoor Sports Complex, which is the heart of the convention, as it houses the massive dealer’s room, a major draw for attendees.

The Hurricane Sandy issue was raised and Collura pointed out that out of seven event organizers, two had to drop out due to storm-related issues. As the discussion wrapped up, the I-Con staffers took questions from those in attendance. Somewhat baffled by this reasoning, I inquired as to how it was possible that losing two staff members could possibly cripple an entire event and whether or not it was possible to simply replace two people. “Losing two people was another factor, yeah. Anybody’s replaceable in theory, but are they up-to-speed with another’s responsibilities? There’s a lot of things like that. Staffers all take on a lot of responsibilities. Hypothetically, I could replace someone, but replacing them in a week and get them up to speed, get accounts ready, etc, it all takes a lot of time. As much as it sucks to say, yeah, losing people was an additional factor. Losing two people for a while prevented us from putting on two additional fundraisers.”

“The issue isn’t losing two people,” said Dave Cortijo, acting event chair. “The path forward we had was that certain people were going to tackle certain initiatives.” He then likened I-Con’s issues to being a ripple effect, where the loss of one team member affects others, and so on.

A trimmed-down version of the convention isn’t something the convention organizers considered, if only due to the fact that a streamlined event would result in only a handful of programming tracks for attendees. With costs soaring well over $100, 000 in terms of putting on event, having a barebones I-Con didn’t seem to make much sense to anyone. The main reason being is that by hosting a trimmed-down event, there would be no budget for the following year’s I-Con. The idea being that I-Con 32 would be the last I-Con, should it not generate the funds required for I-Con 33, which it almost assuredly would not.

“The whole area is rebuilding. At this point, we can’t turn around to our membership base, 60 percent Suffolk, 30 percent Nassau, give or take five percent on either side and the rest from further west, the city, Jersey,” said Cortijo, adding ”We don’t have a fanbase in California we can tap and ask for funds. So, the confluence of events at what is meant to be our peak fundraising time really bit us. We didn’t really have a contingency for that because, frankly, non-profits are really bad at contingency planning.”

The proposed plan from the staff is to host a series of smaller events across Long Island in an effort to engage the I-Con community and keep the convention alive. There is also a plan to launch a Kickstarter or Indiegogo fundraising initiative. For those unfamiliar, Kickstarter and Indiegogo are crowdsourcing/crowdfunding websites where individuals pledge to donate a certain dollar amount and receive a tiered-reward based on the amount of money pledged. Plenty of artistic endeavors and events have made use of Kickstarter or Indiegogo to tremendous success.

The 2013 convention was to be held at Hofstra University, however; it is unknown whether it will remain there once the I-Con 32 convention occurs is unknown at this point.