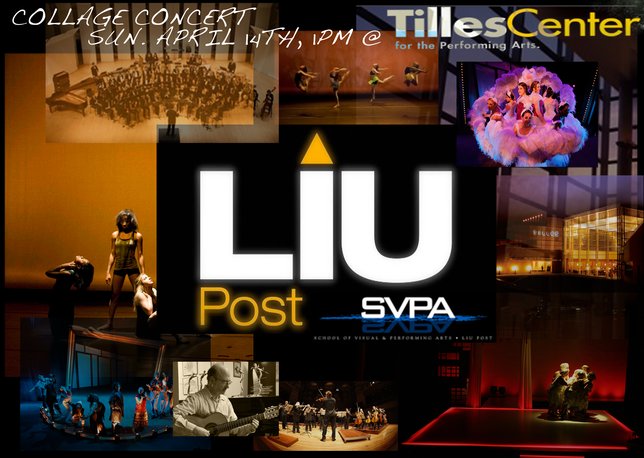 Brookville, N.Y. – Imagine experiencing 100 performers – from theatre to film, dance to graphics, and music to media – staged in a dazzling 60-minute synchronized collage of constant activity.

That’s the idea behind Collage Concert, a one-hour showcase featuring three-minute performances by 100 performers and artists from LIU Post’s School of Visual and Performing Arts (SVPA).  This dazzling display of student and faculty talent will come to the internationally renowned Tilles Center for the Performing Arts on Sunday, April 14, 2013, with performers placed not only on the stage, but throughout the auditorium, creating a uniquely engaging experience full of surprise.

“The fast-paced ‘collage’ nature of the event is designed to celebrate the wide spectrum of talent found in the SVPA, providing a comprehensive illustration of the eclectic and intensive programs to be found there,” said Dr. Noel Zahler, dean of the School of Visual and Performing Arts.

The concert is produced by Bryan Logan, assistant technical director of Tilles Center for the Performing Arts and a student in the Master of Arts program in theatre at LIU Post. He has worked as a technical director, off-Broadway, for the Union Square and Westside Theaters.

Directing the synchronized program will be Dr. Cara Gargano, chair of the Department of Theatre, Film, Dance & Arts Management and professor of dance and theatre at LIU Post. A former dancer, Dr. Gargano studied at the New York School of Ballet under Richard Thomas and Barbara Fallis and later taught at the school. As a stage director and choreographer, she has worked in theatre, opera, and musical comedy. Dr. Gargano is president of the Congress on Research in Dance, and serves as a choreography peer reviewer for the National Dance Association Promotion and Tenure Initiative.

The Collage Concert will feature performances by the LIU Post Wind Ensemble, singers, a string trio, a guitar quartet, as well as presentations by the Post Theatre Company, Post Concert Dance Company, SVPA Film, Television and Radio, and even an aerial acrobat.

Collage Concert 2013 will be held 1 p.m. to 2 p.m. in Tilles Center for the Performing Arts. Admission is free. The public is invited. LIU Post is located at 720 Northern Boulevard in Brookville.

For information contact (516) 299-3500 or email neighbor@liu.edu or visit the Tilles Center box office 30 minutes prior to the start of the performance.