The Knicks got on another hot streak, the Rangers beat the Islanders twice, and the Nets ended January on a sour note. 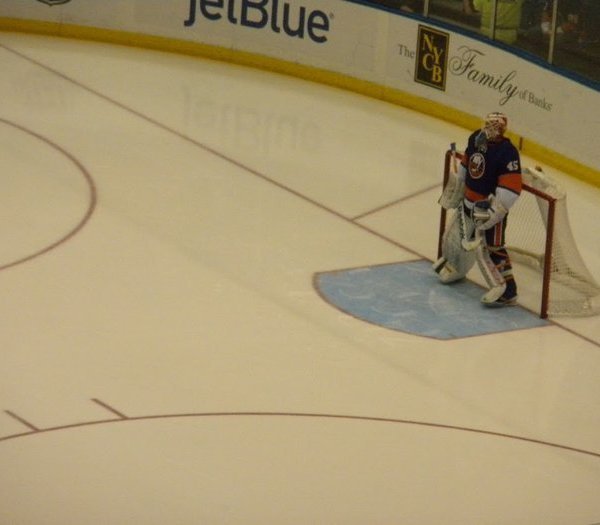 Rangers vs. Islanders
The Rangers and Islanders faced off twice this week, and after the Islanders took their previous meeting a week prior the Rangers were doubtless seeking payback. Wednesday’s game in Yankee Stadium went scoreless for nearly two full periods, but a Brock Nelson snap shot with 1:27 left in the second put an end to that.

The Islander lead did not last long, however, as Benoit Pouliot found the back of the net 40 seconds later to tie the game. Daniel Carcillo did the same for just the third time this season 4:36 into the third to give the Rangers a 2-1 lead, and that score held through the rest of the night. The Rangers took their second straight victory in Yankee Stadium as Henrik Lundqvist stopped 30 of 31 shots and Evgeni Nabokov blocked 32 of 34.

The Rangers may have started to feel at home outside, but they returned to their actual home ice to host their New York rivals for a second game last night. This time around Brian Boyle had MSG’s inhabitants ahead early with a tip-in after an assist from Marc Staal, but Kyle Okposo snapped in the tying goal late in the second period.

Derick Brassard was able to break the tie 12:14 through the third, also on a Staal assist, and Brad Richards fired a shot through Nabokov nearly three minutes later to make it 3-1. Ryan McDonagh cemented the victory with an empty netter in the final second to give the Rangers a 4-1 win.

Both teams will take a few days off before returning to action on Tuesday. The Rangers will host the Avalanche at 7:00 PM, and the Islanders will be in Washington at 7:30 PM.

Nets Thunderstruck by OKC
The Nets’ passed through most of January having only been beaten by one team, albeit twice against the Toronto Raptors. That streak came to a screeching halt when they hosted the Oklahoma City Thunder last night.

Brooklyn led 10-9 at one point early in the first and, though they would stay close to OKC until there were about four minutes left in the quarter, that was the best they would look all night. The Thunder went on a 13-0 run to close out the frame and take a 30-16 advantage.

An 11-0 run in the second quarter helped Oklahoma City bury the Nets even deeper, taking a 24 point lead at the time and going into the half up 63-35. The Nets never even came close in the second half, ultimately falling 120-95 for their second straight loss.

The Nets will try to get back on the right track at 7:00 PM tonight, but they’ll have to go through the Pacers to do so.

Knicks Win Four Straight
The Knicks were having a rough go of it in the middle of January, but after a five-game losing streak they started to climb back in the right direction during the last week of the month. Carmelo Anthony broke several scoring records with his 62-point performance against the Bobcats last Friday, and the team edged out the Lakers for another win two days later.

On Tuesday, New York had a chance to exact a measure of revenge against the Boston team that dominated them on Christmas Day, and exact it they did. Melo put up 11 points in the first quarter, nearly matching the Celtics’ entire offensive output on his own as the Knicks took a 31-15 lead.

That spread burgeoned to 25 midway through the second period as New York continued down the path to victory, and they went into halftime with a commanding 63-37 lead. The Knicks led by as much as 35 in the third quarter, and they went on to win the game handily by a final tally of 114-88.

Anthony cooled down a bit in his output, scoring 24, grabbing 9 rebounds, and contributing 4 steals and 4 assists. JR Smith and Jeremy Tyler both shot for 17 from the bench, to which Tim Hardaway Jr. added 16. Tyson Chandler posted another double-double with 12 points and 13 rebounds.

The Knicks kept rolling when they hosted the Cavaliers on Thursday. After trailing briefly by a margin of 4-5 a couple minutes into the game, New York went on a 24-5 run led by Carmelo; they would leave the first quarter up 38-21 with Melo having already scored 18.

The dominance continued into the second with the Kicks taking a 60-36 advantage into the half, and leading 81-65 after the third. The Cavs cut within 14 points early in the fourth, but never came any closer than that; New York won 117-86.

Melo had 29 points in 30 minutes of play, matched by Hardaway who scored 29 as well. Smith, who got a rare start, put up 19, followed by Raymond Felton with 12 and Chandler with 11.

New York will face a stiffer challenge when they host the Heat to cap off their eight-game home stand at 8:30 PM tonight.