The next part in the MTA's ongoing art series has been revealed. 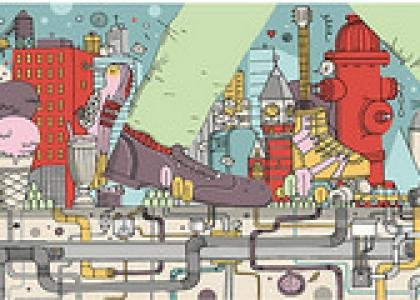 New York, NY - January 30, 2014 - The Metropolitan Transportation Authority (MTA) announced the latest collection of graphic art placed in subway cars, slated for installation throughout January 2014. Three new art cards will adorn the panels in subway cars throughout the MTA system.  The art cards are seen close-up, by millions of riders throughout the year and provide a pleasing burst of creativity into the daily commute.
MTA Arts for Transit and Urban Design commissions five to six artists each year to create transit- related graphic art that appears on horizontal interior-facing panels in subway cars and vertically oriented spaces on station walls.  The MTA initiated the Art Card Program in 1999, modeling it after its curated Poster Program which began in 1991 as a means of enhancing the station environment.
Arts for Transit and Urban Design’s Deputy Director, Amy Hausmann, who oversees the project, commented, “It is always  exciting to commission art that will appeal to a broad spectrum of riders of all ages,  especially since they will spend a lot of time looking closely at the art cards as they travel.  This year, the artists filled their work with playful detail to reward the inquisitive viewer – one includes a drawing packed full of things you might find on the subway, another reveals a charming collage of robots and creatures, and the third new card is a great graphic illustration of some ordinary objects enlarged to extraordinary proportions”.
Artist James Gulliver Hancock, who grew up in Sydney, Australia, and studied Visual Communications at the University of Technology there, developed the concept for his black and white illustration titled “All the Stuff on the Subway” during his many trips on the G train across Brooklyn. The detailed work includes groupings of coffee, donuts, umbrellas, shoes, guitars, and even “a curious smell.”
“Living in New York, you can’t avoid an intimate relationship with the subway,” said Hancock. “I’ve seen different people getting on and off in different neighborhoods and carrying all sorts of things. It always fascinated me how much stuff the subway system moves around the city. So sitting on my commute I would always draw the things around me. I’ve drawn lots of amazing faces, but what caught my eye for this project were the objects that travel with us on the subway.”
Hancock, who splits his time between studios in Brooklyn and Sydney is the author/illustrator of “All the Buildings in New York” published by Rizzoli, and his series of drawings featuring diagrammatic inventories of things like “All the Bicycles in Berlin”, “All the Rain in London”, “All the Cars in LA”, and more.
“When I’m in New York, especially Manhattan, I often get a feeling that everything is out of scale. There are micro details and massive structures all side by side,” said Hancock. “During the day, different things take on different significance and expand and contract in scale -- a take-away coffee might become super important, then a certain building might stand out. This is what makes New York buzz for me. The fact that there are so many different things all side by side -- it’s so fun to explore those juxtapositions.”
Artist  Susan Farrington is an award-winning illustrator who creates whimsical mixed media collages using vintage paper, fabric and paint. Her art card, “Robots,” shows a wide variety of colorful, and amusing robotic beings on the street, with a subway full of some more of these imaginative creatures traveling directly below. Sheet music ties the bi-level work together.
“I started working right away (on this piece) sketching out rough ideas, gathering papers from my giant collection of vintage ephemera, working with color and placement, cutting, painting, gluing, etc.,” said Farrington. “I wanted to celebrate the diversity of subway riders (both robot and real). I also wanted the piece to be fun, colorful and happy. I hope it brings cheer to those who view it.”
Farrington, who has been published in countless magazines, books and newspapers, has been described as a modern day folk artist. She lives in New England with her family.
Lydia Bradshaw, Arts for Transit and Urban Design Manager who coordinates the program said, “The art cards are extremely popular with transit customers, probably because they are at eye level and add an element of fun and visual interest to the journey all year long.  We are exceptionally proud of this year’s selections”.
MTA Arts for Transit popular Graphic program has received various awards and recognition nationally and internationally.  Recently, the program received the 2013 communications grand prize for printed materials by the American Public Transportation Association. This month, the Society of Illustrators awarded Marcos Chin’s 2013 Art Card, “Grand Central Catwalk”, a silver medal in the Advertising category. Chin’s  original work, along with an original work by Pop Chart Lab commissioned by MTA Arts for Transit for the Grand Central Centennial are on view at the Society of Illustrator’s Annual Exhibit until February 1, 2014.
ABOUT  MTA ARTS FOR  TRANSIT AND URBAN DESIGN
MTA Arts for Transit and Urban Design (AFT) encourages the use of mass transit in the metropolitan New York area by presenting visual and performing arts in the transit environment. The permanent art program is one of the largest and most diverse collections of site-specific public art in the world, with more than 250 works by world famous, mid-career and emerging artistsincluding Elizabeth Murray, Romare Bearden, Roy Lichtenstein, Nancy Spero, Jacob Lawrence, Leo Villareal, Ellen Harvey, Jean Shin, Duke Riley, Odili Donald Odita, Alyson Shotz and more. Upcoming projects include works by Sara Sze, Chuck Close, Shinique Smith, Vik Muniz, Xenobia Bailey and more. AFT also produces graphic art, photography installations, Poetry in Motion and more than 7,500 live musical performances in stations annually. AFT serves the nearly 2.6 billion people who ride MTA subways and commuter trains daily and strives to create meaningful connections between sites, neighborhoods, and people.
Please visit  Arts for Transit and Urban Design, or download  Meridian Arts for Transit App.