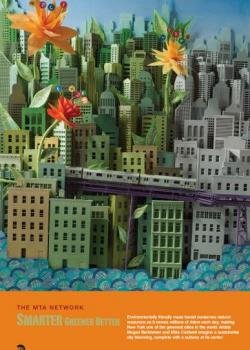 New York, NY - October 5th, 2013 - The MTA’s ever-changing collection of graphic art that brightens the inside of subway cars and stations and a new MTA arts-focused app have received national recognition. The Metropolitan Transportation Authority (MTA) today announced that the American Public Transportation Association (APTA) has awarded its 2013 communications grand prize for printed materials, and first prize for electronic media, to MTA Arts for Transit and Urban Design. The grand prize recognizes the MTA’s Graphic Art Cards and Poster Program and the first prize win goes to a mobile app, Meridian, that provides detailed information and location info about Arts for Transit’s permanent works of art in the MTA system.

“We are extremely honored to receive these awards because it means that the efforts of our staff each and every day to improve the commutes of our customers are being viewed as best-in-class,” said Sandra Bloodworth, Director of MTA Arts for Transit and Urban Design. “But while we always appreciate formal recognition, it is the gratitude and positive reactions we receive from our customers that we love the most.”
Art Cards and Poster Program
MTA Arts for Transit commissions five to six artists each year to create transit-related graphic art that appears on horizontal interior-facing panels in subway cars and vertically oriented spaces on station walls.  The curated Poster Program began in 1991 as a means of enhancing the station environment. In 1998, the MTA redirected the Poster Program to celebrate aspects of the city and the transit system as a whole.
Modeled after the Poster Program, the MTA initiated the Art Card Program in 1999. It provides opportunities for illustrators, print, and other visual artists to create transit-themed graphic art for display within new subway cars.
The graphic art programs are produced with the support of the MTA Marketing and Corporate Communications office of MTA headquarters.  “We have long assisted MTA Arts for Transit with design and marketing,” said Mark Heavey, Director of Marketing and Communications for the MTA. “The strong team efforts, and in particular those of our Senior Graphic Designer Theresa O’Loughlin, have produced consistently stunning results.”
Art direction and project management for the program is provided by Amy Hausmann, Deputy Director of MTA Arts for Transit and Urban Design, and Lydia Bradshaw,  Program Manager.
Meridian App
An iOS/Android app developed by Meridian serves as an electronic pocket guide to the world class art museum that is the New York City Subway system. It was designed to help subway riders find their way to the works of art in the MTA’s collection and provide step-by-step transit and walking directions to those works in selected stations. Its indoor navigation feature will continue to develop as Transit Wireless, a consortium of cell carriers, adds cell and data service throughout the MTA network.
Meridian is a mobile software company specializing in place-centered apps that offer spatial navigation for museums, convention halls, stadia and large stores. Using the app, subway customers can enjoy the same experience as museumgoers at some of the most prominent institutions around the world that have partnered with Meridian for special museum-specific apps, including the American Museum of Natural History.
Development and management of the project to incorporate Arts for Transit in the Meridian app was provided by Yaling Chen, Manager with MTA Arts for Transit and Urban Design; Rob Wilson, Assistant Manager; Jeff Hardison of Meridian.
AdWheel Awards
The American Public Transportation Association presents its AdWheel awards each year to recognize communications efforts of American public transit providers. The awards are presented in five main media categories including print, electronic, campaigns, social media, and special events.
About MTA Arts for Transit
MTA Arts for Transit and Urban Design (AFT) encourages the use of mass transit in the metropolitan New York area by providing visual and performing arts in the transit environment. The permanent art program is one of the largest and most diverse collections of site-specific public art in the world, with more than 300 works by world famous, mid-career and emerging artists. AFT also produces art posters, art cards, photography installations and live musical performances in stations, and has re-launched the Poetry in Motion program in collaboration the Poetry Society of America. AFT serves the nearly eight million people who ride MTA subways and commuter trains daily and strives to create meaningful connections between sites, neighborhoods, and people.
For more on Arts for Transit, visit mta.info/art.