USA Luge ended the 47th annual World Championships Sunday in Igls with a silver medal in the team relay - its third at this event - and set a team record for most hardware collected ... 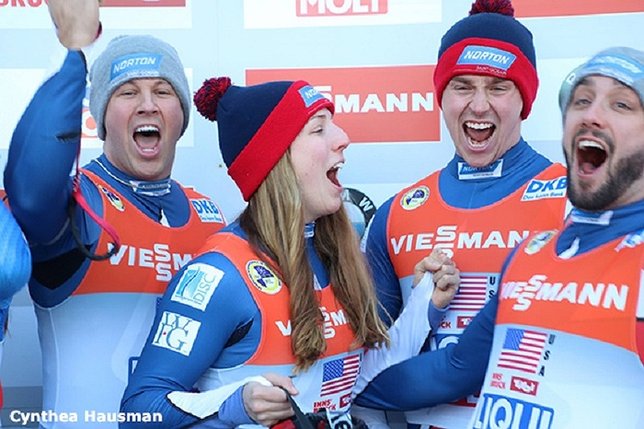 Igls, Austria - January 29, 2017 - USA Luge ended the 47th annual World Championships Sunday in Igls with a silver medal in the team relay - its third at this event - and set a team record for most hardware collected at worlds. Its previous best was a pair of medals in 2009, including Erin Hamlin’s gold.

The Americans now have 13 World Championship medals in their history.

In addition, Hamlin’s three medals in one World Championship set a U.S. individual record. The winner of the sprint gold on Friday and singles silver on Saturday, was joined by Tucker West and the doubles team of Matt Mortensen and Jayson Terdiman.

“The relay is always an exciting event,” said Hamlin, also the Sochi Olympic bronze medalist. “It’s always a blast to get together with the other guys on the team and represent Team USA as a whole, so I’m always excited for it. And having good races before that gives me that much more confidence. You know you have a good shot at being on the podium.”

It didn’t go exactly that way for her teammates.

“Some of the guys are a little disappointed with their results this weekend, so it was a great opportunity for us to get them redemption,” she continued. “I was glad I was a part of helping them do that.”

Hamlin, of Remsen, N.Y., started the effort with the third best women’s run down the course used for two Olympic Winter Games. It was another clean performance on a short track that gave many athletes fits over the three days.

All three USA sleds executed the key start corner and curve nine according to plan. After Hamlin smacked the touch pad at the bottom, West, of Ridgefield, Conn., used the fastest reaction time from the gate. Racing as if being chased by Austrian gendarmes, he put his team in front by 0.4 of a second.

Not knowing what had transpired ahead of them, Mortensen and Terdiman picked up from there with something to prove after disappointments in the earlier sprint and doubles races. Hopes were raised once they accelerated through curve nine.

“In any team relay I always go into my start position thinking our team is winning. Every time,” commented Mortensen, of Huntington Station, N.Y. “I give it full effort and rely on my teammates to know that they’re going to have good runs. So for us, it’s just get out of those handles and get the best run that we can regardless of what happened before us.”

“Igls is actually one of the easier tracks on tour,” added Terdiman, of Berwick, Pa. “It’s got a lot of open curves with long transitions, so as a bottom man on a doubles sled, there’s not really too much for me to do here. I really try and relax and let Matt do his job in the most effortless way possible. But with the relay, we sit up there and it’s my job to get us out of those handles as fast as I can. It felt great. We got through that start curve and I knew the pressure was off. We had great training here all week. But once we got through that start curve in the relay, I knew we had a really good shot at doing something special.”

The third-year team not only held the lead Hamlin and West handed them, but stamped a track relay record time of 2 minutes, 08.664 seconds with four nations remaining in the 15-team field. The German quartet, four teams later to conclude the race, was the only group to go faster, as Tatjana Huefner, Johannes Ludwig and the doubles team of Toni Eggert and Sascha Benecken bettered the mark by almost 0.2 of a second.

Third place went to Russia, which finished 0.5 of a second from the Germans.

As much as the U.S. achievement in the team relay was noteworthy, it’s how it occurred that will be remembered. Some races earlier did not go according to plan for USA Luge as Mortensen and Terdiman in doubles, and West, in singles, all struggled.

The team of Justin Krewson, of Eastport, N.Y., and Andrew Sherk, of Fort Washington, Pa., had the fastest run among the three U.S. sleds, and rightfully gained the team relay start. Also, Taylor Morris, of South Jordan, Utah, after a career-best fifth place in the sprint race, did the same thing on Sunday morning in the men’s event.

Yet the three athletes, who clearly won their team relay positions, saw a bigger picture and offered those spots to their teammates. In that process, they gave people, in and out of luge, pause to consider making decisions that impact the greater good, and how participation in sports implants that clarity on athletes.

“Without those guys making those honorable decisions we would not have been able to come together today as a team and do what we did,” stated Mortensen. “How it played out with our fellow athletes giving us these runs and then getting a medal, brings the team together. They made decisions they thought were best for the team, and then for it to work out, especially after the mishap that Jayson and I had, and you know how Tucker’s race went for him, it took a really big decision for them to do that. World Championships is a huge event. There’s a lot of publicity and media that goes on with it. As a team and as an individual, I’m very grateful for what they did for us.”

“That was one of the most selfless acts I’ve ever seen in my life,” remarked Terdiman. “I said to the guys multiple times, since they made the decision yesterday, that I don’t think I’ll ever be able to thank them for the opportunity that Justin and Andrew gave Matt and me to redeem ourselves in the biggest race of the year after we had such a disappointment in the actual doubles competition.”

In the earlier singles race, West, with three career World Cup wins including two this season, could only muster a 15th place result. Morris finished 17th but had the single best men’s run among U.S. men and could have entered his first international team relay.

“Taylor did win the relay run today fair and square,” admitted West. “I can’t thank him enough for the opportunity. It was tight racing between every one of the male athletes on the U.S. team.”

“Taylor made the honorable decision to give it to me because he thought that my reaction (time) would be a little quicker. I can’t thank him enough for it. But it was nice to get redemption. I was pissed off that my sled was not running. I had two clean runs and ended up in 15th place, which is by far, my worst result of the season. I took a little anger into the (relay) run and it seemed to pay off. And I’m glad at how we finished. Team USA, as a whole, had great runs and we’re a force to be reckoned with when that happens.”

As West was a bit fired up Sunday, the Austrian luge team has its version in the form of Kindl(e) Fire, an athlete who processes tracks at 5G speed.

Wolfgang Kindl, who resides close to his home course, did exactly that at these World Championships in sweeping the individual gold medals. First it was Friday’s sprint race, and Sunday it was the two-heat singles event. Now he is a person of interest when assessing the potential medalists a year from now at the Winter Games in PyeongChang.

Kindl is also at the head of the transition that has seen the German men’s team lose its domination. Sunday’s gold medal winner was followed by Roman Repilov, of Russia, and Dominik Fischnaller, of Italy, in that order.

The gold medalist, benefiting from home ice familiarization, seemed to race blindly the entire day, putting his head back as much has possible for better aerodynamics. He set a track record time of 49.823 in the opening leg, and finalized his title with a second heat 49.976.

It was Austria’s first men’s world title in 21 years, dating back to the 1987 event that saw another Austrian, Markus Prock, now the team’s sports director, race to the gold.

Kindl’s combined 1:39.799 bested the 20-year-old Repilov by 0.06 of a second, and touched off a celebration under a radiant Tyrolean sun. Fischnaller was next, 0.12 behind Kindl.

The World Cup tour now moves into its final four weeks of the season with a pair of German stops wrapped around two weeks in PyeongChang for a look at the 2018 Winter Olympic course.

Next weekend’s race action resumes in the winter sports mecca of Oberhof, followed by two weeks in South Korea for an international training week and pre-Olympic World Cup test races. Thereafter, the season will conclude in Altenberg.

All races will be live streamed by the FIL.

NBC Sports Network will air a one-hour program from PyeongChang on February 19 from 10-11 PM EST.