Rockville Centre, New York, May 5, 2013—World Laughter Day was celebrated at Mercy Medical Center with a heightened enthusiasm and, well, laughter this year with the inclusion of the world-renowned therapeutic-medical clowns of Lev Leytzan. 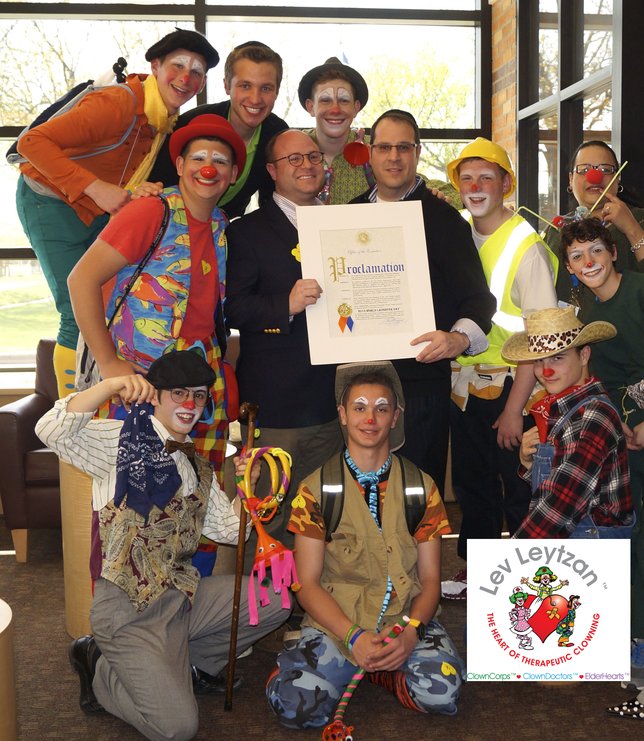 Rockville Centre, New York, May 9th, 2013—World Laughter Day was celebrated at Mercy Medical Center with a heightened enthusiasm and, well, laughter this year with the inclusion of the world-renowned therapeuticmedical clowns of Lev Leytzan.

Established in Mumbai, India in 1998, World Laughter Day traditionally takes place of the first Sunday of the month of May. Fifteen years after its start, the medical clowns of Lev Leytzan; the heart of therapeutic clowning brought their best to the lobby of Mercy Medical Center kicked off with the delivery of a written Proclamation signed by Nassau County Executive Ed Mangano in recognition of World Laughter Day, and acknowledging the important work of Lev Leytzan and its hard working talented volunteer medical clowns.

Bringing “joy and playfulness,” as Margarita M. Fox, Development, Communications and Community Relations Manager at Mercy Medical Center put it, “the clowns navigated through the hospital rooms, making patients and their families laugh and smile all along the way”.

Mrs. T. Kopelowitz and two of her sons, all residents of nearby Far Rockaway (Queens, NY),were at the hospital visiting her father when the clowns arrived: “I have had trouble getting my kids to visit my father because of the whole hospital atmosphere,” Kopelowitz said. “Having the clowns there lightened the whole experience and they were really happy to be there. The clowns made the environment so much more relaxed…not just for the patients but also for the families…that’s really what made all the difference.”

In a letter to Dr. Neal Golberg, Ph.D., founder and Executive Director of Lev Leytzan, Fox wrote, “Yesterday might have been ‘Cinco de Mayo’" but at Mercy it was "Dia de muchassonrisas" or day of many smiles. (Our) patients’ faces lit up when they realized what was happening.” Fox continued, “Bright happy faces, colorful costumes, red clown noses, smiley face balls and impromptu songfests, what a treat! On behalf of our patients, thank you, thank you, thank you for doing what you do!”

The statements above encapsulatethe work that Lev Leytzan has been doing routinely since its establishment in 2004. After rounds were finished, and all the clowning around was through, the patients and families of Mercy Medical Center came away with a day that they will always remember.

“It is fitting that we recognize the importance of the role of laughter in medicine and the role it plays in the healing process,” said Noah Gordon, Director of Development for Lev Leytzan. “After Sunday’s program, more people may understand why”.

About Lev Leytzan
LevLeytzan, a 501 © (3) non-profit, headquartered in Lawrence, New York. Founded in 2004 by Dr. Neal C. Goldberg Ph.D., its mission is to train ambitious youth and adults in the art of medical / therapeutic clowning so that they may help heal others with doses of laughter, joy and empowerment.  In concert with medical personnel, our therapeutic clowns engage the medically ill and residents at hospitals, nursing homes, senior centers and private homes both in the US and abroad.  Our directed play not only lifts the spirits of the sick, it has been shown to have an impact on their healing process as well.  We serve people of all ages and affiliations with sensitivity, compassion and lots of love.