President Obama Delivers the State of the Union before Congress

The president called for a number of measures, including reforms to education and business, during the 2014 State of the Union address. 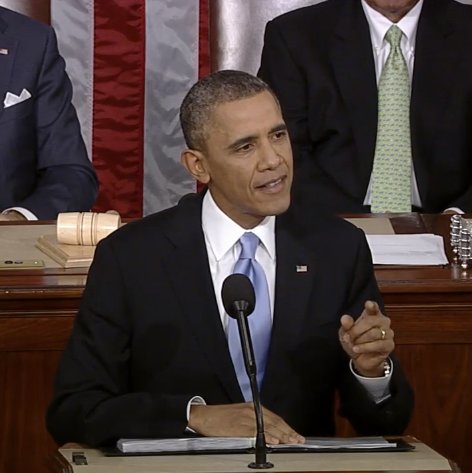 Last night President Barrack Obama delivered his fifth State of the Union address before both chambers of Congress, lauding progress made over the last few years, echoing measures he has pushed in the past, and illustrating his agenda for those ahead. He called for improved education, investment in domestic energy sources, and renewed a vow made before his first term in the oval office to close the prison at Guantanamo Bay. The annual speech began with anecdotes of teachers, workers, and entrepreneurs working hard to find the American dream and continued with highlights of the fruits of their labor.

The president pointed toward what he called the strongest five-year stretch of farm exports in US history, a rebounding housing market, the lowest unemployment rate in five years, a growing manufacturing sector, reduced dependence on foreign oil, and a cut in deficits as evidence of successful policies and actions taken during his administration.

“Tonight, this chamber speaks with one voice to the people we represent: it is you, our citizens, who make the state of our union strong,” he said. “And for the first time in over a decade, business leaders around the world have declared that China is no longer the world’s number one place to invest; America is.”

Despite the hopeful outlook, the president also expressed concerns over elements he fears could hold the country back.

“For several years now, [Washington] has been consumed by a rancorous argument over the proper size of the federal government. It’s an important debate… but when that debate prevents us from carrying out even the most basic functions of our democracy… then we are not doing right by the American people,” he said, referring to October’s shutdown of the federal government.

Obama went on to state that neither side got everything it wanted from the compromise that ended last year’s shutdown, but expressed a desire that, with the fiscal cliff behind it, the nation move forward to focus on creating new jobs rather than another partisan standoff.

“Let’s make this a year of action,” he said, calling for cooperation between Republicans and Democrats to help the country forge ahead by taking action to strengthen the middle class and opportunities for every American, and to increase upward mobility.

“Some [advancements] require Congressional action, and I’m eager to work with all of you, but America does not stand still and neither will I. So wherever and whenever I can take steps without legislation to expand opportunity for more American families, that’s what I’m going to do,” the president vowed.

Among the measures proposed to strengthen the economy, Obama called for an end to “wasteful, complicated loopholes” in that tax code that reward companies for outsourcing jobs and keeping their profits abroad.

“Let’s work together to close those loopholes, end those incentives to ship jobs overseas, and lower tax rates for businesses that create jobs here at home.”

The president went on to suggest that money saved through tax reforms could be used to rebuild the country’s infrastructure—including roads, ports, and waterways—saying that “in today’s global economy, first-class jobs gravitate to first-class infrastructure.” Looking toward the long term success of American industry, he encouraged investment in high-tech manufacturing jobs as well as small businesses (which account for 98% of the country’s exports), and to federally funded research.

“We know that the nation that goes all-in on innovation today will own the global economy tomorrow. This is an edge America cannot surrender. Federally-funded research helped lead to the ideas and inventions behind Google and smartphones. That’s why Congress should undo the damage done by last year’s cuts to basic research so we can unleash the next great American discovery.”

From there, President Obama lauded investment in natural gas as a safe “bridge fuel” helping to power the American economy with locally sourced energy that produces fewer carbon emissions than other fossil fuels, and in solar power which helps the country use less foreign oil while producing cleaner energy. He asked for the end of $4 billion in annual tax credits for fossil fuel companies “that don’t need it” and for the redirection of those funds toward “fuels of the future that do.”

“The shift to a cleaner energy economy won’t happen overnight, and it will require tough choices along the way,” he said, “but the debate is settled. Climate change is a fact. And when our children’s children look us in the eye and ask if we did all we could to leave them a safer, more stable world, with new sources of energy, I want us to be able to say yes, we did.”

The president went on to make a plea for immigration reform before turning his attention to education, pushing for programs to help train the workforce to find and perform well in modern jobs.

“Of course, it’s not enough to train today’s workforce. We also have to prepare tomorrow’s workforce, by guaranteeing every child access to a world-class education.”

Obama called for the improvement of early childhood education, echoing the sentiments of Governor Cuomo who rallied for universal access to pre-school classes in his State of the State address three weeks ago. Like the governor, the president also moved for the introduction of modern technology into the classroom in order to provide a wealth of information to students in all areas of the country.

“Last year, I also pledged to connect 99 percent of our students to high-speed broadband over the next four years. Tonight, I can announce that with the support of the FCC and companies like Apple, Microsoft, Sprint, and Verizon, we’ve got a down payment to start connecting more than 15,000 schools and twenty million students over the next two years, without adding a dime to the deficit.”

The president expressed his hope that alongside access to early childhood education, students will be able to continue their economic careers past high school. He stated that the country is offering colleges more incentive to provide better value to students, and providing millions of students the chance to cap loan payments at 10% of their income.

“I want to work with Congress to see how we can help even more Americans who feel trapped by student loan debt.”

Turning back to the workforce, Obama pushed for an end to unequal pay for female workers, calling the fact that women in the US make 77 cents for every dollar earned by a man in the an embarrassment.

“A woman deserves equal pay for equal work. She deserves to have a baby without sacrificing her job.  A mother deserves a day off to care for a sick child or sick parent without running into hardship—and you know what, a father does, too,” he said. “It’s time to do away with workplace policies that belong in a ‘Mad Men’ episode.”

In addition to a drive for equal pay and improved workers’ rights, the president rallied for an increase to the minimum wage, stating that the current wage is effectively 20% lower than when Ronald Reagan gave his first State of the Union address, and that profitable corporations such as Costco see higher wages as an effective means to boost productivity and reduce employee turnover.

“Now, women hold a majority of lower-wage jobs, but they’re not the only ones stifled by stagnant wages. Americans understand that some people will earn more than others, and we don’t resent those who, by virtue of their efforts, achieve incredible success, but Americans overwhelmingly agree that no one who works full time should ever have to raise a family in poverty.”

The president began drawing his speech to a close by praising the controversial Affordable Care Act. He pointed toward three million Americans under the age of 26 who have gotten to stay on their parents’ medical plans because of the law, and nine million more who signed up for private coverage or Medicaid under the legislation. He also pointed to reforms within Obamacare that prevent carriers from dropping patients for having preexisting conditions, and from charging women higher premiums than man.

“I don’t expect to convince my Republican friends on the merits of this law, but I know that the American people aren’t interested in refighting old battles. So again, if you have specific plans to cut costs, cover more people, and increase choice–tell America what you’d do differently,” he challenged his congressional opponents across the aisle. “Let’s see if the numbers add up, but let’s not have another forty-something votes to repeal a law that’s already helping millions of Americans.”

Obama ended the night with a focus on foreign policy, noting an end to the Iraq war and stating that after 12 years military operations in Afghanistan will soon come to an end. He also pointed toward sanctions and the threat of military action as cause for the removal of chemical weapons from Syria that is now underway, and praised ongoing negotiations to prevent Iran from obtaining a nuclear weapon.

The president did not mince words, acknowledging Iran’s support terrorist groups and stating flatly that he does not trust the country, but went on to say he believes successful sanctions have put the international community in a position to establish conditions for a verifiable end to Iran’s nuclear efforts.

“If John F. Kennedy and Ronald Reagan could negotiate with the Soviet Union, then surely a strong and confident America can negotiate with less powerful adversaries today.”

President Obama concluded his speech by praising the men and women in the armed forces, and stating that the country cannot rest on its laurels if I wants to maintain a fair and just society for its children.

“The America we want for our kids—a rising America where honest work is plentiful and communities are strong; where prosperity is widely shared and opportunity for all lets us go as far as our dreams and toil will take us—none of it is easy. But if we work together, if we summon what is best in us, with our feet planted firmly in today but our eyes cast towards tomorrow, I know it’s within our reach.”