The governor covered topics ranging from education and the economy to medicinal marijuana and corruption in the annual State of the State address. 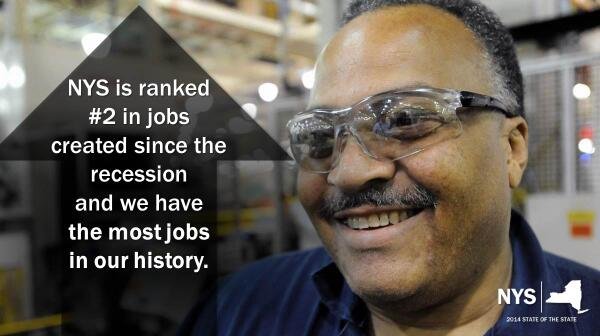 It’s an election year for the New York State Governor, and Andrew Cuomo was likely well aware of that as he began the annual State of the State Address Wednesday afternoon. Covering his own accomplishments and progress made in New York since his election three years ago, Cuomo painted a positive picture of New York while also highlighting some of his goals for the new year.

Early in the address, the Governor looked at the challenges New York faced when he first came to office, pointing toward a loss of jobs, shortcomings in public education, and high taxes before highlighting what his administration has done to try to fix these problems. Cuomo noted that the state had spent more money than it earned for over 60 years, saying that “if you spend a lot then you have to tax a lot” and blaming high taxes for the departure of many businesses from New York.

Over the last three years, however, the state has gone from a $10 billion deficit to a $2 billion surplus despite a reduction in taxes. New York paid the highest taxes of any state in the country when he entered office, but according to the governor residents now pay a lower income tax rate than they did three years ago. NY passed its first property tax cap during his governorship, and created what he described as a fairer tax system in replacing the old flat tax with a graduated tax to ease the burden on low and middle class earners.

Cuomo also credited programs such as Startup NY, which launched last year, for bringing business back to New York by making it an inexpensive place for new businesses to locate in giving them a 10-year tax exempt grace period, thus helping to reverse the state’s reputation as being too costly for companies to thrive in. He added that 380,000 new private sector jobs have been created in NY since 2010—the second highest number in the country. With the economy stimulated, New York increased exports by a rate of 15%, lowered unemployment in every region, and saw its credit rating increased by all three rating agencies.

Going forward, the governor stated that he wants to address several issues which remain major problems for New Yorkers. NY’s property tax, as Long Islanders are well aware, is the highest in the US and actually represents a larger portion of total tax revenues than does the income tax.

“Skyrocketing local property taxes have made it increasingly difficult for middle-class families to stay in their homes and have driven businesses out of our state,” said the governor before proposing a $2.2 billion package of tax relief for residents and business owners. He also proposed a tax credit for renters to help individuals afford shelter, a $100 million investment in affordable housing for the state, and to raise the threshold on the estate tax which has encouraged older residents to move out of New York and declare residency elsewhere in order to pass more of their finances along to their inheritors.

Among the causes for such high taxes, Cuomo said that an excess of local governments which cost too much too run has proven a drain on the wallets of New Yorkers. “We have a proliferation of government which is exceedingly expensive,” he said, voicing support for the sharing of services and consolidation of smaller local governments to reduce cost and increase efficiency.

Governor Cuomo would go on to state that the best long-term economic strategy is to have the best education system possible, and to do so by moving away from what he described as 1950s-beuaracracy and toward classrooms worthy of the year 2020. He aims to further the changes made with the introduction of teacher evaluations by launching an enticing incentive program, rewarding teachers who receive the highest possible marks on their evaluations with a bonus of up to $20,000—roughly 27% of the average teacher’s salary in New York.

“You want teachers who can perform and do perform?” he asked, “Then incentivize their performance with a performance bonus and pay them like the professionals they are.”

The governor also called for the start of universal full-day pre-K classes, and the introduction of more modern technology such as laptops, desktops, tablets, and broadband internet service into every classroom as a means of equalizing education for all students.

A $2 billion investment in technology upgrades would help classrooms across the state gain access to the web and the many learning resources and tools that come with it.

Among other changes and reforms, Cuomo officially announced that he will be establishing what amounts to a pilot program for medical marijuana, which 20 other states currently prescribe as a form of pain management for cancer patients as well as other illnesses. 20 New York hospitals will soon be able to do so too, providing a means to study the effectiveness of medical marijuana in the state and potentially increase its availability from there.

On the subject of crime, the governor was pleased to point that New York’s prisons have seen a reduction in occupancy and the state’s crime rate has fallen, however, 40% of individuals who are incarcerated eventually return to prison. Cuomo aims to stop this “revolving door” by helping to train one-time criminals to reenter society and get jobs instead of returning to a life of crime as a means of supporting themselves.

“We are reducing the madness of an incarceration society and ending a system of unnecessary human and financial waste,” he said.

Cuomo also moved to strengthen punishments for distracted and drunk drivers, pushing for the license suspension of any teenager caught texting while driving, and the permanent license revocation of anyone convicted of drunk driving three times.

He motioned for greater ethics reform to hold politicians in the state more accountable for their actions and misconduct as well.

Extreme weather has given the state pause for great concern according to Cuomo, and he hopes to address some of the problems faced after Sandy by installing the most advanced weather detection system of any state so New York can better brace itself for the next big storm. He is also working to establish the first college of emergency preparedness and homeland security, and hopes to train 100,000 citizens by the end of the year so they can in turn help their families and communities get through emergency situations.