NYBC's daily mission is to procure enough blood to ensure that anyone who needs it gets it; it’s a matter of life and death. 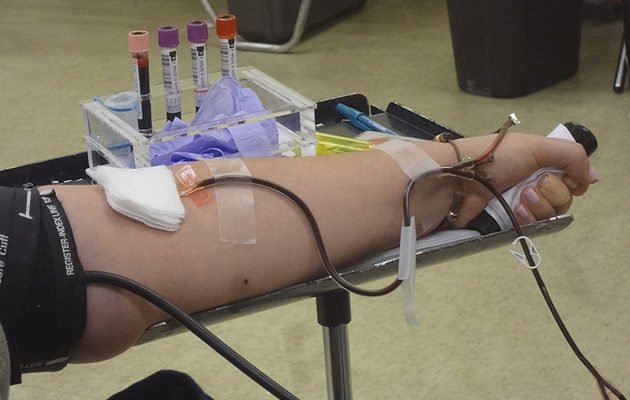 Plainview, NY - January 24, 2019 - The New York Blood Center recently set up camp at the Plainview Public Library in order to encourage locals to donate to a great cause; one that could easily save more than a life or two.
Tom Behrens, a Donor Specialist with the Long Island division New York Blood Center and Levittown resident, noted that their daily mission is to procure enough blood throughout New York State to ensure that anyone who needs it gets it; it’s a matter of life and death, he said.
“We do it year-long…basically, what we look to do all year is to maintain our level of blood. We try to collect about 2,000 units of blood a day, state-wide, to be able to meet the overall demand,” he said. “Certain times of the year, we tend to use more blood…for example, leading into the summer months, people tend to travel more and as a result, there are usually more accidents on the road.”
However, while attendance at the Plainview Library was steady that day, Behrens noted that it was unfortunately a tad on the slow side overall.
“The weather is bad, and as a result people are not around as much to donate,” he said. “Every season has a different difficulty, but we always need the blood year-round. We’re not currently at a crisis level in terms of the amount of blood we need, but we always need it. It could change with one bad accident or a big storm.”
While the New York Blood Center happily accepts blood of any type, the so-called “Universal Donor,” Type O-Negative, is obviously the most coveted due to its high compatibility with any other blood type.
“Usually, when someone goes to the hospital who needs blood urgently, they will receive O-Negative since it takes time to examine and match someone’s blood type,” he said. “So, we always want to make sure that O-Negative is always as highly stocked as possible. In fact, we’ve already had a few O-Negatives donate today.”
In addition to just plain old blood, certain donors who meet the correct criteria can opt to be hooked up to a machine known as the Alyx Component Collection System (or “Alyx” for short). This device is able to able to collect twice the normal amount of red blood cells than normal by actually filtering them from a donor’s plasma, after which the plasma is returned; the body is then able to quickly re-generate the donated red blood cells, Behrens said.
“It helps two people as we actually get two whole units of red blood cells,” he said. “It’s a very similar procedure to doing a regular whole blood donation…it’s a slightly smaller needle, but the process takes longer – typically 35-40 minutes – as opposed to a normal donation, which takes about five minutes.”
For those civilly-minded enough to drop by and donate a pint of the good stuff, some rewards were provided in the form of snacks and beverages while they were recuperating.
Briana Schinz, born, raised, and residing in Old Bethpage, was hooked up the Alyx machine and passing the time while being drained away playing games on her smartphone; she had only recently become a blood donor, but said that it’s something she intends to stick with going forward.
“The last time I donated was in April of 2018, and this is my second time giving blood,” she said. “If you end up in the hospital and you want blood there for you when you need it, then you should be willing to give it yourself…you have no right to expect it if no one else is donating. People need blood, and people need to donate blood.”
Plainview resident Dean Plakas has been donating blood regularly since he was a high schooler; now 48, he still makes a point is doing so, and the fact that the drive was being held at his local neighborhood library also enabled him to pick up some reading material on the way out as well in the form of some graphic novels.
“I donate as often as I can…I’m just trying to serve the greater good, trying to help someone out,” he said. “The Blood Center has a poster up in the donation area about this little girl fighting Leukemia who has had 50 blood transfusions, and she’s only a few years old. That’s a lot of blood, so obviously there’s a huge need for people to give.”
If you’re interested in donating blood and wan to know where and when the next time the New York Blood Center is visiting your area, visit their web site at www.NYBC.org.