Police arrested Sean Farrell in the death of his mother; A Baldwin man was arrested for stealing Vicodin prescriptions. 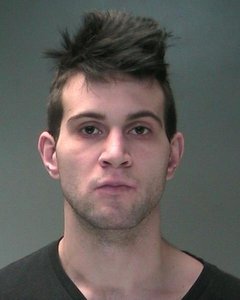 Medford Man Arrested for Killing Mother
Police say they have made an arrest in the murder of a 45-year-old woman on December 10, 2013. The victim, Bonnie Farrell of Medford, was found dead by her husband, 47-year-old Eric Connelly.

Officials were called to home on Norway Pine Drive in Medford after Farrell was found on the bathroom floor with a head injury. She was pronounced dead at the scene and an autopsy was performed by the Office of the Suffolk County Medical Examiner.

An investigation resulted in the arrest of Sean Farrell, the victim’s son. Farrell (pictured), 24 also of Medford, was arrested on Friday and is being charged with 2nd Degree Murder. Farrell was scheduled for arraignment on Friday at the First District Court in Central Islip. He is being held overnight at the 5th Precinct.

Baldwin Man Arrested for Stealing Prescriptions
According to the Nassau County Narcotics Bureau, a Baldwin man was arrested on Thursday at 11:15 a.m. for stealing prescriptions for Vicodin HP, a painkiller.

Babar was arrested while at County Court in Mineola for an unrelated charge. He is facing two counts of Possession of a Forged Instrument 2nd Degree. He was arraigned on Thursday at First District Court in Hempstead.