One Million Moms for Gun Control Marches in NYC

One Million Moms for Gun Control marched in New York City on Monday, and this weekend will be holding rallies across the country, including a March on Washington for Gun Control. 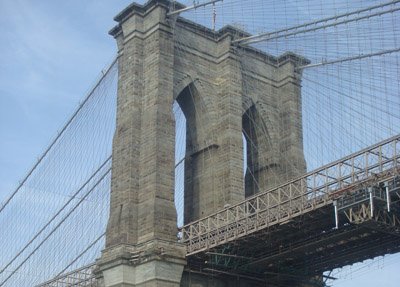 Approximately 400 people participated in the event, including a march across the Brooklyn Bridge to City Hall.
Shannon Watts, an Indiana mother of five who founded 1MM4GC on Dec. 14, the day 20 young children and six adults were murdered in one of the nation’s most horrific mass shooting events, called upon other mothers to stand up against gun violence:
“Moms: We can never back down from our newfound conviction and resolution to strengthen this country’s gun regulations. We will not go back to letting the National Rifle Association and Congress and State Legislatures tell us how to keep our kids safe. As moms, we know how to do that and we know it means new and stronger gun laws. Let’s make sure that we wake up with a stronger resolve to support President Obama’s proposed legislation to strengthen our country’s gun laws. Let’s be his foot soldiers. So that in a month from now, we will be amazed again to say, “Look how much change can happen in just TWO months.”
But their efforts will go well beyond New York, where military-style assault weapons are now banned.  The group is calling for Congress to support the gun control proposals presented by President Obama last week, especially a ban on assault weapons and enforcing background checks on all weapons sales.
“We call on House Speaker John Boehner and Senate Majority Leader Harry Reid to bring the proposed bills to the floor for a vote in both houses of Congress, leaving partisanship aside in the interest of American families. This legislation must be passed – not debated or diluted. We will not allow special interests to obscure the issue: the safety of America’s children and families are our priority,” Watts said in an official statement last week, in support of the President’s proposed legislation.
This coming weekend 1MM4GC is co-sponsoring the March on Washington for Gun Control.  Rallies and marches will be held across the country, in San Francisco, Boston and Indianapolis, on the same day.
Newtown families and survivors of gun violence are expected to attend the event, along with various D.C.-area politicians and religious leaders who will be leading the march.
Share your thoughts on this article by posting a comment below or by visiting our Long Island Living discussion forum.