Senator John E. Brooks took a ceremonial oath of office surrounded by constituents, friends, and family, in the district at Seaford High School this afternoon. 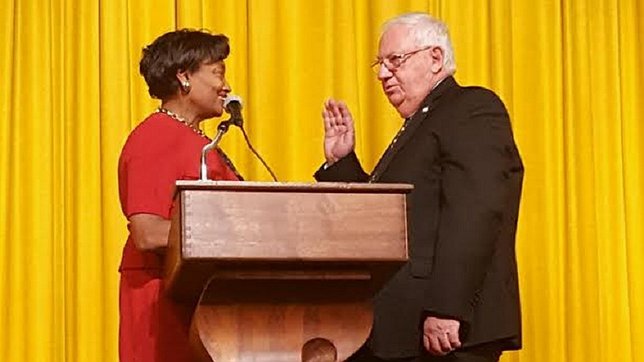 Seaford, NY - January 7, 2017 - Senator John E. Brooks took a ceremonial oath of office surrounded by constituents, friends, and family, in the district at Seaford High School this afternoon.  He officially took his oath of office on January 4th, 2017 in Albany, New York.  Senator Brooks, knowing that many community leaders would not be able to attend the official swearing in, he organized the ceremony to include everyone from the district and Long Island.  It was held at Seaford High School to highlight the Senator's commitment to public education.

Senator John Brooks said, “My number one priority is serving the needs of my constituents and being accessible.  Hosting this ceremony within the district is significant because I want them to know that their involvement is important, from day one. We have a lot of work to do, but their input is essential to making real, effective change in Albany and here at home on Long Island.  I want my constituents to know that, unabashedly, my door is always open.”

Brooks concluded, “It’s time to get to work by fighting to end corruption in government, standing up for quality education for all students, and working to make Long Island a more affordable place to raise a family.”