USA Luge saved its best for the last day of competition in the calendar year by scoring five Viessmann World Cup medals on Saturday in Park City, setting a single day team record. 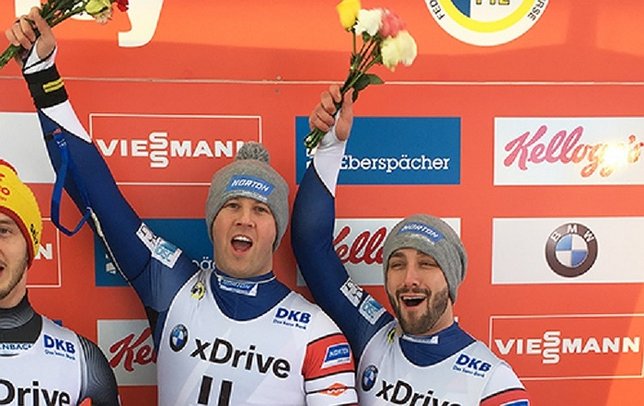 Matt Mortensen and Jayson Terdiman celebrate after capturing the bronze medal in the BMW Sprint Cup.

The deluge of medals was led by Erin Hamlin with gold in singles and the BMW World Cup Sprint Race. They were the third and fourth victories in a career that also includes an Olympic bronze medal and a World Championship.

“It’s very exciting. It was a great race today,” stated Hamlin, of Remsen, N.Y. “We had perfect conditions. I’m just very relieved and happy I could capitalize on that and have two solid runs. It’s my first good race of the season overall so I’m excited.”

Hamlin’s roommate, Emily Sweeney, took a pair of silver medals, giving her a career total of three medals, all silver and all just behind Hamlin.

“I’ve been in a tough spot mentally and physically,” commented the effervescent Sweeney, of Suffield, Conn. “So to have this is really huge for everything. Everything is starting to pay off. Hopefully we can keep the momentum going. I’m really looking forward to World Championships and the (Olympic) test event in PyeongChang.”

The 2013 Junior World Champion on this track, Sweeney has been slowed this fall by a wrist injury that required surgery.

The women’s sprint nearly produced a repeat of the medal sweep of Lake Placid in singles one year ago as Summer Britcher, of Glen Rock, Pa., finished fourth behind Germany’s Tatjana Huefner by an agonizing 0.002 of a second.

Matt Mortensen and Jayson Terdiman, 2014 Olympians on different sleds, picked up the bronze in the sprint race. For the team that came together in March 2014, it’s their second career medal after a silver in the Lake Placid doubles event two weeks ago.

“The sprint cup is really good for us,” said Mortensen, of Huntington Station, N.Y. “It takes the start out of it. We’re pretty good at sliding. We came here wanting to improve on our finish yesterday (fifth place in doubles) and that’s exactly what we did.”

“We had a great run. We’re really fast sliders,” added Terdiman, of Berwick, Pa. “We’re going to keep working on our start, keep trying to improve. Hope we keep getting faster and faster. Can’t argue with a bronze medal today. We’re very happy about that.”

With a sense of the dramatic, two of the five medals occurred on the biggest stage of the season when Hamlin raced to singles gold on the 2002 Olympic track in Park City, Utah.

The second and deciding heat of the race aired live on NBC, part of the U.S. Olympic Committee’s Winter Champions Series.

“That’s pretty cool,” said Hamlin about the timing of her first win of the day. “Sometimes it’s hard to tell because racing still feels the same. It’s really exciting to have the country be able to see that. Get a little more exposure for the sport and hopefully people can see how exciting it is.”

“My starts today weren’t where I would have liked them to be,” commented the winner. “They didn’t feel really great. So there were some improvements I could have made there, but that’s me, always trying to find something I could change. But the (second) run itself was very good. I felt really comfortable. My training was pretty consistent. I was able to capitalize on good training and feeling comfortable.”

Sweeney sat in fourth place after the first heat. In the final, she raced past German World Cup leader Natalie Geisenberger, who had a luge boot split just before both runs. Also, Tatyana Ivanova, of Russia, crashed in the second heat entering curve 14 to end her medal hopes, leaving Sweeney at the head of the leaderboard with just her roomie remaining at the top of the track.

“It always makes it so much sweeter. Sitting at the top knowing Emily was the one in first makes it a little less pressure and it makes it a lot of fun,” remarked the 30-year-old Hamlin. “It’s always fun to celebrate with teammates. I’ve been racing a long time. It makes it that much more exciting…..it’s an awesome day.”

Sweeney was timed in 1:29.384. “The (World Cup) runs weren’t perfect,” she said. “The first run I knew I had a little bit of time, but I kind of like racing like that. It gives me some kind of security going into the next run. (The final run) I just tried to let it go. My lines weren’t perfect but I felt really good on the sled.

“I am so pleasantly surprised, but also it’s just a relief. I really needed a win for myself. I didn’t win but I won in my own mind so it’s great.”

Alex Gough, of Canada, was third, in 1:29.584, while Britcher slid into fifth place, and Raychel Germaine, of Roswell, Ga., took ninth for her second best World Cup result.

With the 200 points that come with winning two World Cup races, Hamlin advanced from just inside the top 10 in the overall rankings to third place. Sweeney and Britcher are sixth and seventh, respectively.

There was personal triumph, too, in that Germaine had a pair of ninth place results Saturday to solidify her spot on the 2017 World Championship team. She’s tied for 12th in the season standings. Germaine’s progress is such that she has entered the first seed in the women’s division and is exempt from Nations Cup qualifying when the tour resumes in Koenigssee, Germany three weeks from now.

Although the network television curtain came down after about 40 minutes of national coverage of the singles, the medal haul for USA Luge continued afterward in the sprint races with three more podium results.

The sprint events in all three disciplines are just reserved for the top 15 of the weekend races. It becomes a World Cup point bonanza for those who advance.

Like their women teammates displayed earlier, in the sprint Mortensen and Terdiman accelerated all the way down the speedy Park City course. And while some competitors had difficulty with curves 12, 13 and 14, the USA used its familiarity with the layout to not only avoid trouble, but use key pressure points in the corners to sling-shot their way to higher speed.

The sprint race and the overall World Cup doubles standings are nearly mirror images of one another. The American team placed right behind two German sleds in the race, and can be found fourth overall, behind three teams from Germany.

The U.S. team’s bronze medal time of 32.938 was 0.05 from silver medalists Tobias Wendl and Tobias Arlt. Toni Eggert and Sascha Benecken, winners of five of the first six races this year, were the gold medalists in 32.838. They’ve opened a substantial lead in the World Cup rankings. Wendl and Arlt are a distant second, with Robin Geueke and David Gamm third.

Mortensen and Terdiman are in fourth place at the holiday recess. Jake Hyrns, of Muskegon, Mich. and Anthony Espinoza, of Park City, are 12th overall after winding up 11th in the race.

Justin Krewson, of Eastport, N.Y., and teammate Andrew Sherk, of Fort Washington, Pa., are 17th on the campaign. They were 10th in the sprint.

As he was in the singles race on Friday, Tucker West of Ridgefield, Conn. was the USA’s best. Saturday he was sixth and is in sixth place in the season-long World Cup battle.

The race itself was wrought with drama, as it appeared that Austrian Wolfgang Kindl was headed to victory until he hung onto curve 14 too long and capsized bringing his race to a sudden end with the finish line in sight.

The mishap allowed Italy’s Dominick Fischnaller to hold onto first place with a winning time of 28.302. Park City singles winner Roman Repilov, of Russia, was just 0.005 slower and took silver, while Andi Langenhan, of Germany, was the bronze medal winner in 28.343.

Felix Loch, also of Germany, entered Park City with the tour lead, and departed in second place, replaced by Repilov. In fact, the two-time and defending Olympic champion was 0 for North America in four starts. Kindl is third, and now marking time until the World Championships on his home track in late January.