Governor Cuomo unveiled the first signature proposal of his 2016 agenda – his push to restore economic justice by making New York the first state in the nation to enact a $15 minimum wage for ... 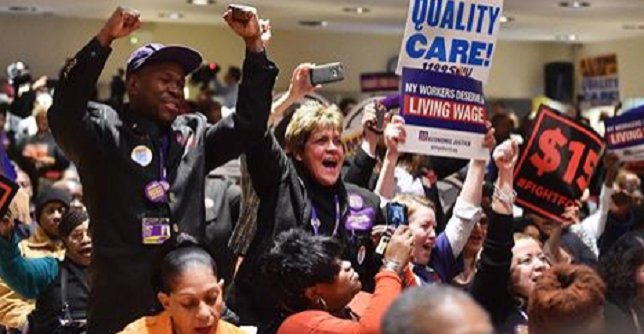 Albany, NY - January 4, 2016 - Governor Cuomo unveiled the first signature proposal of his 2016 agenda – his push to restore economic justice by making New York the first state in the nation to enact a $15 minimum wage for all workers. While highlighting this proposal, the Governor announced that the State University of New York will raise the minimum wage for more than 28,000 employees. This increase for SUNY employees will mirror the phased-in schedule for fast food workers secured last year, as well as State Workers announced in October.

“This state thrives when every New Yorker has the opportunity and the ability to succeed. Yet the truth is that today’s minimum wage still leaves far too many people behind – unacceptably condemning them to a life of poverty even while they work full-time,” said Governor Cuomo. “This year, we are going to change that. We are going to raise the minimum wage to bring economic opportunity back to millions of hardworking New Yorkers and lead the nation in the fight for fair pay.”

"We’re in the middle of the longest streak of private-sector job growth on record, but there are still too many Americans who haven't enjoyed a bigger slice of the pie they're helping to grow,” said U.S. Secretary of Labor Perez. “President Obama and I believe in the basic proposition that if you work full-time in America, you shouldn’t have to raise your family in poverty. That is why I applaud Governor Cuomo, the SEIU, and workers for coming together to advocate for an increase in the minimum wage for all New Yorkers. In the absence of congressional action, state and local leaders nationwide are raising their minimum wages to ensure that everyone earns a fair day's pay for a hard day's work. President Obama and I will continue to support workers who are struggling to make their voices heard. We will keep fighting for policies that create shared prosperity and an economy that works for everyone, not just a fortunate few."

Attorney General Schneiderman said, "No one who works full time should have to live in poverty and no company should be allowed to abuse its workers. But when we allow poverty wages, we are sending the opposite message. Raising the minimum wage is an achievable, effective, direct way to improve the lives of millions of New Yorkers."

Upon approving the SUNY increase, more than 28,000 hourly paid staff, student workers, and work study participants will see their wages increase to $9.75 an hour beginning in February of this year, and ultimately reach $15 an hour on December 31, 2018 in New York City, and July 1, 2021 statewide, mirroring the increased schedule of fast food workers and state employees. This move makes New York among the first in the nation to set its higher education public employees on a path to $15 an hour. The SUNY Board of Trustees is expected to approve this increase in its minimum wage in its January board meeting. The increase is projected to cost approximately $28 million once fully implemented, and will be covered by SUNY.

"The State University of New York is proud to ensure that anyone working on a state-operated SUNY campus continues to be paid at least minimum wage, including all full-time staff as well as students participating in work study programs,” said SUNY Board Chairman H. Carl McCall. “We look forward to joining Governor Cuomo in setting a model for state entities and public university systems across the country."

“Governor Cuomo’s commitment to implementing a higher minimum wage at scale throughout New York State is a commendable action that SUNY is proud to be a part of,” said SUNY Chancellor Nancy L. Zimpher. “The State University of New York recognizes the value of all faculty, staff, and students at work on our campuses and the significant contributions they make to our campus communities as well as local economies in every region.”

A regional breakdown of the more than 28,000 SUNY employees who will benefit from this increase is below:

Boosting New York Families
Raising the minimum wage to $15 an hour for all industries directly benefits 2.3 million workers in New York State, about a quarter of the total workforce. Critics see this as teenagers earning pocket money but in fact, more than half of these workers are 35 or older and more than 70 percent are over the age of 25. More than 40 percent are married, parents or both and many provide the main source of their family’s income. Today, a full time job at New York’s minimum wage pays only $18,720 per year, and for a single mother with two children, that’s below the official poverty line.

Raising the minimum wage to $15 also restores what had been a promise of fairness: $15 is about where New York’s minimum wage in 1970 would be, if adjusted for inflation.

A regional breakdown of the number of individuals in all industries in New York State currently earning less than $15 an hour is below:

Boosting New York’s Economy
Raising the minimum wage puts more money in the pockets of working families, giving them more spending power. The NYS Department of Labor projects the increase to a $15 minimum wage means a boost of over $15.7 billion for the state economy. This rise in consumer spending is critical to continued economic growth; especially when weak consumer demand is a key factor holding back new hiring.

We know this to be true from our own experience: New York increased its minimum wage eight times from 1991 through 2015, and six of those times, employment rose following the increase. When the minimum wage rises, productivity tends to increase, and increased worker retention saves employers recruitment and training costs.

Protecting New York Taxpayers
Some opponents argue it would be better to increase NYS’s Earned Income Tax Credit – a refundable tax credit to low-wage working families based on income, age, and family size – rather than the minimum wage. But these are complementary rather than competing strategies. Without a strong minimum wage the EITC could act like a wage substitute, allowing certain companies to pay poverty wages, and have those low pay levels subsidized by other employers and taxpayers, in much the way that the fast food sector has socialized part of its payroll by having employees rely on public assistance.

Enabling Employers to Plan
The economic benefits of increasing the minimum wage outweigh the costs. But to provide businesses with the opportunity to plan, and in order to be sensitive to the relative abilities of different regional economies to absorb the change, the proposal phases-in the increase in New York’s minimum wage in New York City and more gradually in the rest of the state, on the following schedule:

Leading by Example
Governor Cuomo announced New York State would lead by example by raising the minimum wage for state workers to $15 an hour. To date, no other state has enacted a $15 public sector minimum wage. Approximately 10,000 State employees will benefit across all branches, and the increase will phase-in on the same schedule above. Across New York, the cities of Syracuse, Rochester and Buffalo have also announced increases in the minimum wage for public employees.