Ring in 2014 at The Times Square New Year's Eve Celebration

Ring in the new year at the Annual Times Square New Year’s Eve Celebration in New York City and see the famous ball dropping ceremony when the clock strikes midnight. 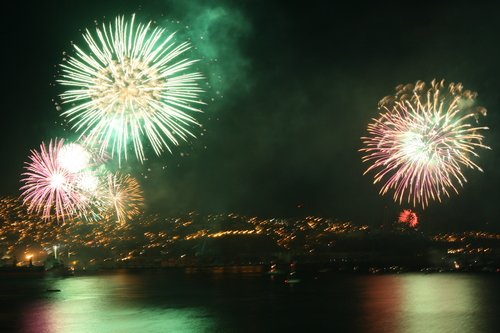 The Annual Times Square New Year’s Eve Celebration in New York City is only just a few days away! Many locals are ready to say goodbye to 2013 and say hello to 2014. With what the new year will bring remains unknown, one thing is for sure, welcoming the new year in style at Times Square sure will make it a good start.

The first New Year’s Eve celebration at Time Square took place in 1904. During the initial celebration, an all-day street festival culminated from a fireworks display set off from the base of the tower. At midnight, the joyful sound of cheering, rattles and noisemakers from over 200,000 attendees echoed the streets of the city. Two years later, the fireworks display was banned by the city. With the fireworks no longer permitted, it wasn’t until 1907 that the traditional ball dropping celebration for New Year’s Eve was introduced in place of the fireworks.

This year, on Tuesday, December 31st, roughly one million people will continue the tradition as locals crowd the New York City streets for the famous annual ball dropping event in celebration of the New Year - 2014.

The NYC streets will fill up as early as the morning of New Year’s Eve to get as close to the center of action as well as a good view. The center being at 43rd Street and Broadway. The earlier you arrive, the better the spot you will get. However, large screens will be be available for viewing with easy visibility. Getting the spot that you want works on a “first come, first serve” basis. Once you know where you want to stand, you are better off staying there or someone else will gladly help themselves.

When the clock strikes 12:00 AM, a blizzard of more than a ton of colored confetti will fall upon the people from the rooftop of the city’s buildings.

There have been seven different versions designed of the world’s symbolic welcome to the new year - the Ball. The first Ball was made of iron and wood and weighed in at about 700 pounds and was covered with 100 light bulbs. Throughout the years, the Ball was upgraded to be bigger and better. In 2007, the modern LED technology finally placed the light bulbs of the past for the 100th Anniversary of the New Year’s Eve Times Square Ball. Finally, in 2008, the permanent Ball was revealed atop One Times Square where it sparkles throughout the year. Here are some fun facts about this year’s Ball:

The Ball is able to create a palette of more than 16 million vibrant colors with billions of patterns that produces a kaleidoscope effect.

If you are planning on spending this year’s New Year’s Eve in the city, here are some survival tips:

The City is not the best option for everyone. If you are one of the folks who rather stay close to home and avoid such a crowded place, be sure to check out our 2013 New Year’s Eve Entertainment Guide for all the hot happenings near you for a splendid way to ring in 2014!