Gov. Cuomo is working with New York congressional delegates and Mayor Michael Bloomberg to formalize a request for $42 billion in federal aid for Sandy recovery. 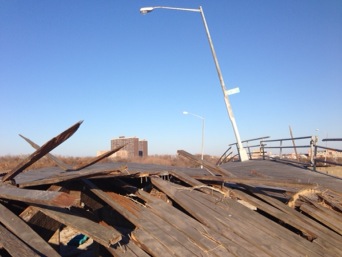 Now, Cuomo is teaming up with Bloomberg and members of New York’s Congressional Delegation to bolster the state’s request for $42 billion in federal aid to cover Sandy damages and restoration, as well as building mitigation systems to prevent a future storm from inflicting the same extent of damage as Sandy.  The group has a meeting on Monday to discuss the federal aid request.
$32.8 billion (revised from the original estimate of $30 billion that Cuomo and state Comptroller Thomas DiNapoli presented earlier in the month) is being requested to cover the restoration expenses.  An additional $9.1 billion is being requested to fund efforts to mitigate future storm damage.
If the state receives the entirety of the request, Nassau County would receive over $6.6 billion, and Suffolk would receive nearly $1.8 billion.
"The devastation caused by Hurricane Sandy is of unprecedented proportions, ranking among the worst natural disasters in our nation's history in terms of loss of life, property damage, and economic impact," Governor Cuomo said in a statement. "Today's meeting with our state's Congressional delegation builds upon the close cooperation between local, state, and federal partners that has existed throughout Hurricane Sandy and in the storm's aftermath. Working together, we will rebuild stronger and better than ever before, so New York State is better prepared and has the infrastructure in place to handle future major weather incidents."
Cuomo also said that he will personally lobby for the relief aid in Washington.  Mayor Michael Bloomberg has already scheduled a trip to the capital on Wednesday.
The New York delegation have also met with congressional members in New Jersey in an effort to pool resources.  An aid package for both states count amount to more than $62 billion.  Connecticut has yet to announce how much federal aid it will be requesting, though the state will likely receive significantly less than New York or New Jersey, which took the brunt of the storm.
Sen. Charles Schumer weighed in on the major federal aid request, saying in a statement, “Make no mistake, this will not be an easy task, particularly given the impending fiscal cliff, and a Congress that has been much less friendly to disaster relief than in the past. This will be an effort that lasts not weeks, but many months, and we will not rest until the federal response meets New York's deep and extensive needs."
Long Island’s Rep. Peter King said, “Given the catastrophic damage inflicted on New York, I am committed to working with Governor Cuomo and the congressional delegation to ensure that Long Island and New York get the federal assistance they need to recover."  King told media outlets following Monday’s press conference that Speaker John Boehner has already committed to working with New York’s representative to make sure the state gets what it needs for a full recovery.
On Sunday, New York received $27 million in funding from a National Emergency Grant to put over 5,000 unemployed New Yorkers to work as part of the state's immediate Sandy recovery effort.
Share your thoughts on this article by posting a comment below or by visiting our Long Island Living discussion forum.