The increase in homeless New Yorkers, along with the influx of relief workers has created a housing shortage in the area, is only compounded by the delayed progress in restoring power.

Emergency relief workers who have come to the area to contribute to Long Island’s post-Sandy recovery are sleeping in the cabs of their trucks in area parking lots. 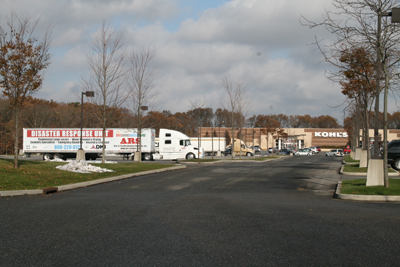 Sandy has created a severe housing shortage since she made landfall in the area over two weeks ago.  In New York City, the Department of Housing estimates that 40,000 New Yorkers are currently homeless, and will be given temporary housing in apartments and hotels.
On Long Island, the temporary housing situation is more difficult to organize because of the predominance of single family suburban homes, and the lack of open apartments and hotel availability, despite the availability of emergency housing funds.  FEMA director Craig Fugate has said that all housing solutions, including the trailers made notorious in New Orleans following Hurricane Katrina, will be brought into the area.
Besides the tens of thousands of New Yorkers who were left homeless by Hurricane Sandy, LIPA emergency relief workers have been sleeping in their trucks with Long Island hotels booked, and the power authority has been setting up tents and trailers to provide these crews with temporary housing.  In some cases, relief workers are sleeping on cots in public public buildings including fire houses.
Many of these out of state workers are pulling 16-hour days, earning time and a half pay, compounding the housing crisis with the sheer cost of recovering from the storm.  So far, the process has been delayed by a widespread lack of digital communications, among other management oversights.  LIPA and National Grid workers have been using paper maps and inaccurate or incomplete information when responding to work sites, adding several wasted hours to repair projects across the Island.
LIPA officials expect 99 percent of customers in Nassau and Suffolk counties to have restored service by the end of Tuesday, and their emergency work force has already begun to decline.
Share your thoughts on this article by posting a comment below or visiting our Long Island Living discussion forum.