The 2014-15 Season is the last time you'll be able to catch an Islanders Game at the Coliseum - get the scoop on the season's home games right here! 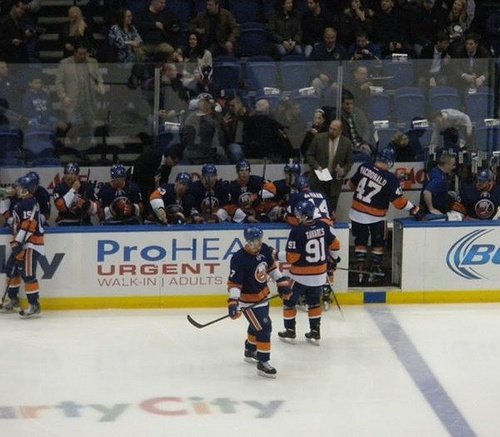 Islanders vs Penguins Game in 2014.

As many local fans already know, the Islanders will be moving from their current home at the Nassau Veterans Memorial Coliseum to Brooklyn's Barclays Center for the 2015/16 Season, making this current season the last one for the Coliseum. If you haven't yet had a chance to catch the Islanders at the Coliseum one last time, you're in luck - there's plenty of games happening between now April, and fingers crossed, the Islanders will make it to the Stanley Cup Playoffs this year!

Whether you're a diehard Isles fan, or you're typically an armchair aficionado, if you're a Long Islander, you'll want to catch the Islanders play at the Coliseum one last time before they move to Brooklyn.

To make it easier for you to catch a game, we've compiled the 2014-15 Season's Home Games:

For all of the upcoming Islanders Games, including away games, visit the Islander's Official Website.

Are you a big Islanders fan who loves to snap pics at the game?
If you have snapshots of a recent Isles Game,
email them to us and we'll add them to our New York Islanders Photo Gallery!