The Islanders rode the Long Island Rail Road to practice at the Barclays Center for the first time. 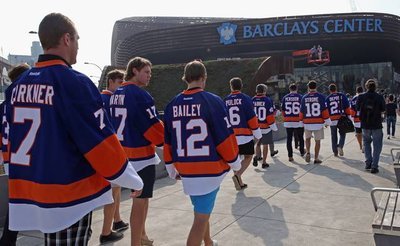 On Thursday the New York Islanders visited their future home in Brooklyn. After a meeting at the Garden City Train Station, players, coaches, and media, took the Long Island Rail Road to the Brooklyn Atlantic terminal and walked a block to the new Barclay’s Center. There the team hit the ice for training camp. Joining them were the 1980, 1981,1982, and 1983 Stanley Cup Championship banners hanging from the rafters.
“You walk off the train and come around the corner and you see the Barclays sign right in front,” said Islanders forward Matt Martin to NHL.com. “It’s got that rust finish that I thought was pretty cool. It’s definitely a different atmosphere. There’s a lot more going on. You walk in the building and it’s open right away - you can see the ice and see the scoreboard.”
Before practicing the team was met by Bruce Ratner, Barclays Center Majority Owner and Developer, and Brett Yormark, the Brookyn Nets CEO. When speaking to the media Yormark assured the team’s colors will stay the patented Islanders orange and blue.
The person most excited for the Islanders move is owner Charles Wang.
“When we came out there and saw the beautiful white ice and the big logo and everything, the heart went ‘ba-boom, ba-boom,’” Wang said. “It’s unbelievable.”
Despite his excitement to move into the Barclays Center, Wang still plans on honoring the Nassau Coliseum lease until it expires in the 2014 - 2015 season.
“There’s been no discussion (about moving sooner), because our plan is to honor the commitment of the lease,” Wang said. “I think we’ve always wanted to get here as soon as possible. But again, we’re going to honor that lease.”
Last week a few of the players informally skated together at the Iceworks but Thursday marked the first time the players and coaching staff got together as a full group. The team had two on-ice sessions and were split between Group A, which consisted of veterans, and Group B, which was made up of prospects. Islanders head coach Jack Capuano says the prospects would have an opportunity to make the team.
“I think we’ve always been an organization that gives opportunity,” Capuano said. “They’re friends in that room right now, but they’re competing for jobs. We’ll just have to see how these guys play during the preseason games. They’re not going to make the team in the first three days here. We’ve always felt that if there’s somebody who’s going to help us win, then they’re probably going to be on this hockey team.”
Thursday’s skate is the only time the team will practice at the Barclays Center. The next time the Islanders will be in Brooklyn is on September 21 when they take on the New Jersey Devils.
[Source: NHL]
Featured Image: Team opened training camp with practice at the state-of-the-art arena (Photo Credit: New York Islanders Official Facebook Page)
Video courtesy of the New York Islanders YouTube channel, Photos courtesy of the New York Islanders official Facebook page.