A public hearing has been set for this Thursday by the Suffolk County legislature to address concerns relating to the post-Sandy response.

Long Islanders will have an opportunity to air their concerns about the overall response to Superstorm Sandy directly to local leaders this week.  90 percent of Long Islanders lost power during the storm which cost the state over $30 billion in damages. 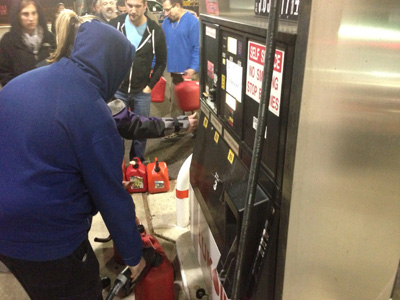 The Suffolk County Legislature’s Public Safety and Economic Development and Energy committees will be holding a joint public hearing in Smithtown on Thursday, Dec. 6, at 6 p.m. to assess the response to the storm, and the effectiveness of relief efforts.  Local residents are invited to express their grievances related to the storm, or provide any recommendations for legislators for future emergency situations.
Superstorm Sandy created and exposed a litany of problems with various utility facilities and infrastructure across Long Island, including millions of dollars in damage at the Bay Park Sewage Treatment Plant in Nassau County.  Suffolk County residents experienced long-term, widespread power outages, and both counties, as well as New York City and other portions of southern New York were subject to a major gas shortage which fed into the panic following the storm.
A follow-up meeting will be scheduled after the hearing, for the purpose of bringing together all the departments, agencies and companies involved in the response to the storm to respond to the public concerns at the hearing.
The hearing will be held at the William H. Rogers Building located at 725 Veterans Memorial Highway, Smithtown.
Share your thoughts on this article by posting a comment below or by visiting our Long Island Living discussion forum.