Photos of Eyes Could Be Used to Help Solve Crimes

Researches in Glasgow were recently able to identify individuals using photographs of retinas. 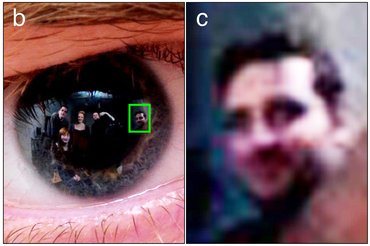 A study conducted at the University of Glasgow in Scotland recently showed that high resolution photos taken of a person’s eyes yielded identifiable images of other people reflected off the subject’s retina.

Published by the Public Library of Science, the study used a 39-megapixel camera to shoot photographs a meter away from subjects. The subjects in turn looked at a crowd of onlookers, and when the resulting image was enlarged the onlookers were visible as a reflection in the subject’s eye. Images were not particularly big—ranging only between 27x42 pixels and 42x56 pixels—and were blurry when zoomed in upon, but the reflected individuals were still clear enough to be recognized.

Participants who were unfamiliar with the subjects were given a face-matching task as part of the experiment, and were able to correctly pick out the reflected persons a surprising 71% of the time. Other participants who were familiar with the reflected persons were able to identify them with even greater accuracy, correctly matching them in 84% of attempts.

The experiment was conducted under ideal lighting conditions with a strong camera, but researchers say that it proves the potential for using similar techniques to catch criminals as technology continues to improve. A typical smartphone carried by millions of individuals across the world may currently only average between 8 and 13 megapixels for its camera, but that number continues to rise and Nokia has already released its Lumia 1020 which packs a 41 MP lens, bearing three more megapixels than the camera used in the study.

With the power of mobile-cameras constantly on the rise, photos snapped at crime scenes could help investigators identify suspects or witnesses using methods similar to those in the Glasgow study.  Particularly, the technique would be of help “For crimes in which the victims are photographed (e.g., hostage taking, child sex abuse), reflections in the eyes of the photographic subject could help to identify perpetrators,” according to researchers Chistie Kerr and Rob Jenkins.

[Source: PLOS ONE]
Image courtesy of Chistie Kerr and Rob Jenkins, via PLOS ONE