Winter may be a week away, but LI is already getting a taste of freezing temperatures. 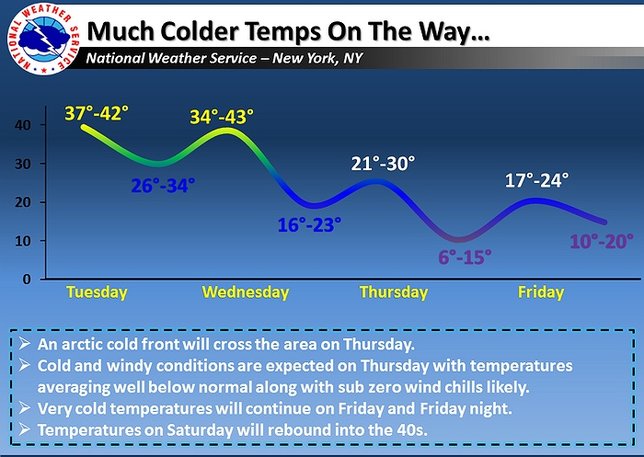 An arctic cold front will be moving in to the regions toward the middle of the week.

The polar vortex–a low-pressure system that spins over the arctic and occasionally jettisons a surge of cold air further south–is expected to make its return to Long Island and much of the surrounding region this week.
Following a moderate start to the week, temperatures on Long Island are expected to plummet between Wednesday and Thursday, dropping from a high of about 40° on Wednesday to a low around 12° Thursday night.
Long Islanders largely became familiar with the polar vortex in 2014 when it brought record lows to the area. Fortunately, the burst of arctic air isn't expected to stick around particularly long this time around. While highs are predicted to hover around the mid 20s Thursday and Friday and there's even an outside shot of overnight lows dipping into the single digits, the Island should quickly thaw out on Saturday as temperatures rebound into the mid-to-upper 40s.
The brief drop in temperature does come with a possibility of snow as well. As of Tuesday afternoon the NWS was predicting a 30% chance of snowfall Wednesday night, as well as an equal likelihood of precipitation Thursday, mainly after noon.
Despite the frigid temperatures, Friday is expected to be mostly sunny during the day, but clouds may roll in at night, bringing another chance for snowfall. The NWS was predicting a 40% chance of snow Friday night, as well as a possibility of mixed snow and freezing rain continuing through Saturday morning.
Fortunately, the spike in temperatures on Saturday means that while precipitation may persists throughout the weekend, it would quickly shift from snow to rain and any snow that does fall early Saturday morning will quickly wash away.
For the most up to date weather information, head over to the LongIsland.com Weather Center, where you can find the latest weather forecasts, advisories and more.
To get the latest traffic & road conditions before traveling, visit the LongIsland.com Traffic Center, and be sure to check out the live traffic feeds on our Traffic Cam Page.
Please visit our Long Island School Closures Page for regular updates of school closings in your district.
[Source: NWS]