An elderly woman lost control of her vehicle Friday afternoon and crashed through the front window of a Trader Joe's, running over one customer and pinning another against a wall. 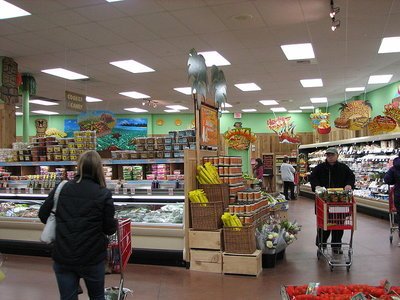 An elderly woman crashed into a Trader Joe’s in Oceanside on Friday, terrifying shoppers and employees as her car ended up fully inside the store.

At around 1 p.m., the woman claimed to have lost control of her vehicle, and smashed through the large window at the front of the store, bringing a shower of glass down on the employees and shoppers inside.  Her white Buick Verano plowed right through a Christmas wreath display and candy aisles before hitting shoppers who were waiting on the checkout lines.

At least 15 people were injured, some critically.  One man was run over by the car, and another elderly man was pinned up against a wall by the vehicle.

Eleven of the shoppers and customers who were injured were taken to South Nassau Communities Hospital and Nassau University Medical Center and treated for injuries ranging from head injuries and broken bones to cuts and bruises from the broken glass.

One regular shopper at the Trader Joe’s on Long Beach Road, Maricel Baetiong, told the New York Post that she was fortunate to have not been hit, as she returned to the store after forgetting an item when the Buick crashed through the front of the store.

“Five seconds after I walked away, the car crashed inside,” said Baetiong. “It was so loud, and I saw the wall open up. The glass shattered and everyone started running. Everyone was running to the back.”

She added, “There was an old lady inside the car, maybe in her 70s. She didn’t look injured.”

Though more than a dozen people were injured, the fire chief at the scene stated that it could have been much worse with more people in the store shopping for the holiday season.