NASA said a "fireball" meteor was seen up and down the East Coast Friday night, and it landed safely in the Atlantic Ocean. 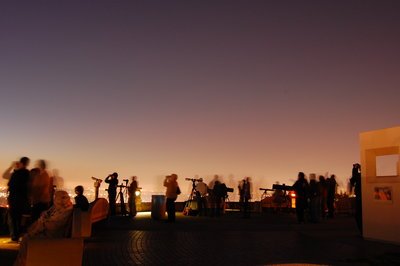 See anything strange in the sky on Friday night?

You weren’t the only one.  A bright streak of light was seen by people across Long Island around 8 p.m. on Friday – a light show bright enough to be seen from most of the East coast.  The Huffington Post has received accounts of the flash by people from South Carolina to Connecticut – all of who got an eyeful of what was called a “single meteor event” by Bill Cooke of NASA’s Meteoroid Environmental Office.

In an interview with the Associated Press, chief astronomer Derrick Pitts of the Franklin Institute in Philadelphia believes the phenomenon to be a meteor or “space rock” due to accounts by witnesses.

In the clearest skies, the meteor was visible for roughly 40 seconds.  According to Cooke, the meteor entered the atmosphere over Eastern Pennsylvania, and looked like a “fireball,” meaning that it was a meteor that appears brighter than others – even brighter than the planet Venus.

"Judging from the brightness, we're dealing with something as bright as the full moon," said Cooke. "The thing is probably a yard across. We basically have (had) a boulder enter the atmosphere over the northeast."

The size was of some concern, as the meteor was large enough to produce meteorites.  No meteorite crash sites on land have been reported.

Based on accounts, Cooke said it appeared to be moving “roughly toward the southeast.”  Though there were rumors that the meteor landed in Delaware, NASA found that it instead crashed into the Atlantic Ocean.

Cooke found that the meteor was travelling at a rate of at least ten miles per second – “much faster than a speeding bullet.”

Though meteor sightings are rare, meteors – even those classified as fireballs – are not, and occur every day worldwide.

To see a video of Friday’s meteor event from a security camera in Maryland, click here.