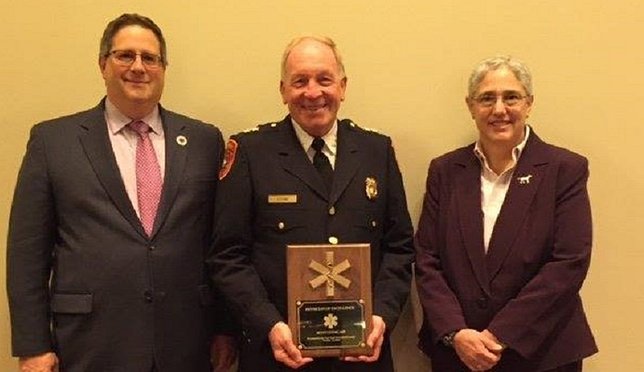 The Physician of Excellence Award for New York State EMS is presented annually by the New York State Department of Health and the New York State EMS Council to a physician who has demonstrated exceptional dedication and experience in the pre-hospital environment. Physicians from all of New York State’s 67 counties are eligible for the award. Suffolk REMSCO (Regional EMS Council) is a collaboration of various medical professionals within Suffolk County, which was formed to share vital medical and emergency response information. Dr. Coyne is the first physician associated with a Suffolk County police department to win this prestigious award.

Dr. Coyne joined the department in 1992 and in 2008, he created the department’s Medical Crisis Action Team (MEDCAT), a district-wide tactical medical team comprised of police officers trained as advanced life support Paramedics or Critical Care EMTs. Dr. Coyne is the also the medical director of the Suffolk County Police Academy with broad responsibility for all educational basic and Advanced Life Support EMT programs. Since 2012 he has trained thousands of Suffolk County police officers and Fire/EMS personnel in procedures for response to high risk operations such as active shooter situations, and has equipped all patrol officers with combat tourniquets to effectively respond to such incidents. In 2015 Dr. Coyne and 3 MEDCAT police officers received the International Association of Chiefs of Police Lifesaving Award at their annual meeting in Chicago for saving the life of a police officer who was gravely injured by a fleeing suspect.

In 2012, Dr. Coyne spearheaded the department’s Narcan program to address the epidemic of heroin and opiate overdoses. Since that time Suffolk County police officers have administered Narcan more than 650 times to reverse the effects of opiate overdoses. The New York State Attorney General selected the SCPD Narcan Program as a model for law enforcement throughout New York State, and in 2014 was hailed by the U.S. Attorney General as a model for law enforcement Narcan programs nationwide. In 2015, in conjunction with the police department's Community Relations Bureau, Dr. Coyne introduced “The Ugly Truth,” a public educational program designed to heighten awareness and treatment of victims of the opiate epidemic. The Ugly Truth program has experienced overwhelming success and continues to be presented in school districts and community meetings throughout the county.

“It has been my distinct honor to serve the Suffolk residents and all of the members of the Suffolk County Police Department every day,” Dr. Coyne said. “It has truly been the highlight of my professional career, and I look forward to many more years of continued service to our county and our great police department.”​