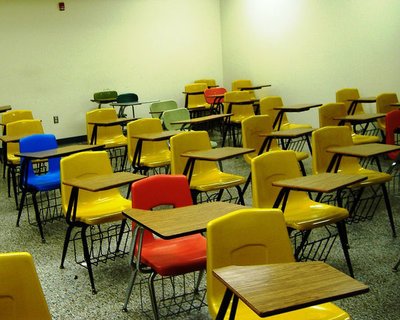 Before an audience of hundreds, State Education Commissioner John B. King Jr. Wednesday spoke out in support of the state Common Core in an open discussion education forum at Mineola High School.

Outside, King was greeted by protestors with signs that read "Down with King" and "It's freezing and we are here -- Just wait until Election Day;" together with a parent who spoke out against high stakes testing from the back of a pickup truck.

“We will not stand for it. Our children will not take these tests. But they are not listening,” Jeanette Deutermann, a parent from North Bellmore said of state education officials from the back of the truck. “This is our way of getting our word out without getting inside.”

Despite the opposition outside, however, King was generally well received at Wednesday’s meeting, as opposed to Tuesday’s forum held at Ward Melville High School where he was jeered, booed and, at times, shouted down by a packed-out crowd of teachers and parents.

Although he received some criticism during the meeting, parents and teachers quietly listened to King as he spoke and even applauded at the meeting’s conclusion.

"We have to continue to look for ways to reduce…testing. After each of these forums, we go back and listen to what we've heard to make thoughtful adjustments," King said according to Newsday.

But for Doris Ribaric, 38, a mother of three students in the New Hyde Park elementary schools, King’s promise to listen and make adjustments is not enough.

“What he [King] kept saying was, 'We'll look into it.' But what about the kids going through it now?” she said. “I really hope he listens to the parents, because this is very difficult for the kids right now.”

King also spoke out in support of turning over student records to inBloom, a private, Atlanta-based high-tech corporation, for computerized, “cloud”-based management of the data, another hotly-contested issue.

Speakers at Wednesday’s forum were organized by topic; and the meeting, originally scheduled to conclude at 6:30 p.m., ended after 7.

"You sit there and you take a lot of incoming, and I think the state continues to be lucky to have John's service in this capacity," Regents Chancellor Merryl Tisch said.

The Ward Melville and Mineola forums were part of a series of about a dozen that King has planned to attend statewide. Included are two more meetings on Long Island: one on Nov. 26 in Suffolk and another on Dec. 9 in Nassau. Times and locations have not yet been announced.