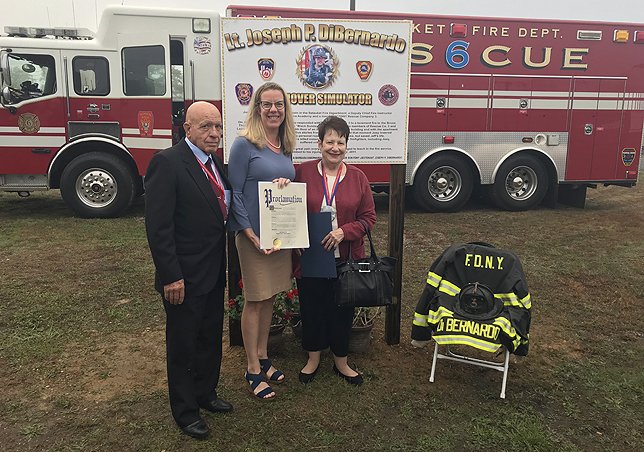 Yaphank, NY - November 8, 2017 - Suffolk Legislator Kara Hahn on Friday commemorated the dedication of a new “Flashover” training simulator at the County’s Fire Academy in memory of fallen New York City and Setauket firefighter Joseph DiBernardo, Jr. who passed away in 2011 from injuries he sustained while fighting a blaze in the Bronx. This new simulator will train local volunteers to identify the warning signs of an impending catastrophic “flashover” event. Flashover is a transitional phase of a fire during which all the objects within a space are heated to their ignition point. Auto ignition of a space’s entire contents during a flashover occurs almost instantaneously, with the full space being consumed by fire that reaches temperatures between 900 and 1,200 degrees Fahrenheit. The heat produced during a flashover is not survivable for more than a few seconds.
In 2005, DiBernardo who was a co-founding member of the Brookhaven Technical Task Force and an instructor at the Suffolk County Fire Academy, was one of six FDNY rescuers who were searching for people they thought might be trapped in an illegally subdivided building when they themselves suddenly became trapped. The firefighters desperately jumped or fell trying to escape the flames that surrounded them. DiBernardo reportedly helped another firefighter safely escape the fire before the rope that he was climbing down gave out. He landed on his feet, but shattered every bone below his waist, spending 18 days in a coma and requiring 20 hours of surgery on his legs. Two of the six firefighters did not survive the fall on what would come to be known as "Black Sunday."
Following DiBernardo’s death, Legislator Hahn in 2012 won approval for a resolution to dedicate the portion of Nicolls Road stretching from Route 347 to Fox Hunt Lane in Setauket in his honor. The renamed portion passes the development where DiBernardo lived as a child, and the Setauket Fire House where he served.