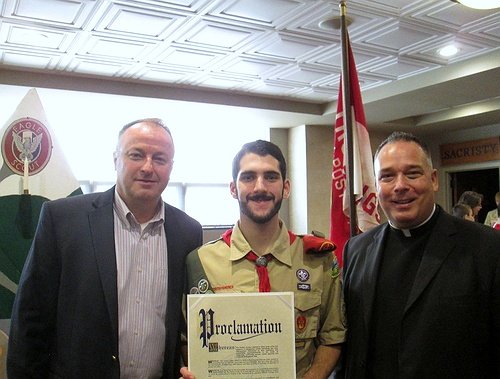 Kings Park, NY - November 20th, 2014 - Suffolk County Legislator Robert Trotta praised Peter Gonatas of Fort Salonga for achieving the esteemed rank of Eagle Scout. Peter has been an active member of Troop 75 since 2007 and has held numerous leadership posts during his scouting years.

For his Eagle Scout Community Service Project, Peter guided his fellow scouts in constructing a Pergola in the courtyard of St. Joseph’s Church in Kings Park. Peter hopes that this will provide the camp children, parishioners, residents and other groups a place to sit and relax.

“Peter has demonstrated he is capable of responsibility and leadership by completing the tasks necessary to becoming an Eagle Scout. As a student at SUNY Stony Brook, Peter’s   goal is to become a doctor. I am sure that the skills and confidence he acquired during his scouting years will guide him in his future endeavors. I applaud his work ethic and hope that he will remain committed to the 13th Legislative District,” said Suffolk County Legislator Robert Trotta.