Il Vizio: An Authentic Taste of Italy, Right in the Heart of Long Island

Restaurant owner Luigi Prudente notes success is derived from great food and a staff that treats every customer like they are part of the family. 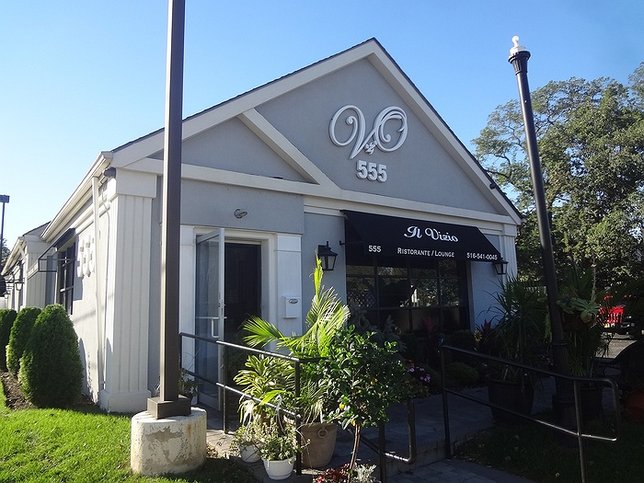 Il Vizio is located at 555 Broadway in Massapequa.

Massapequa, NY - November 2, 2018 - For a taste of tried and true Italian cuisine and hospitality, you don’t need to head across the Atlantic to the shores of Puglia; one needs only to head on over to Il Vizio of Massapequa to experience a real taste of the old country, right in the heart of Long Island.
In a day in age when there are almost more restaurant options out there than there are people to patronize them, Il Vizio owner Luigi Prudente of South Ozone Park notes that his establishment has become so successful because each and every member of his staff strives to make every customer feel as though they are part of the family.
“We’re a family-style place, and we try to get to know all of our customers and make everyone a regular,” he said. All of my employees have been working with me for years… we spend between 80 and 90 hours a week together, but we're a family, and we translate that feeling to the dining room when people come in. We want them to feel like they're in our house, and as a result a lot of customers have become our regulars...we know their names, we host all of their family events. We can't really ask for better.” 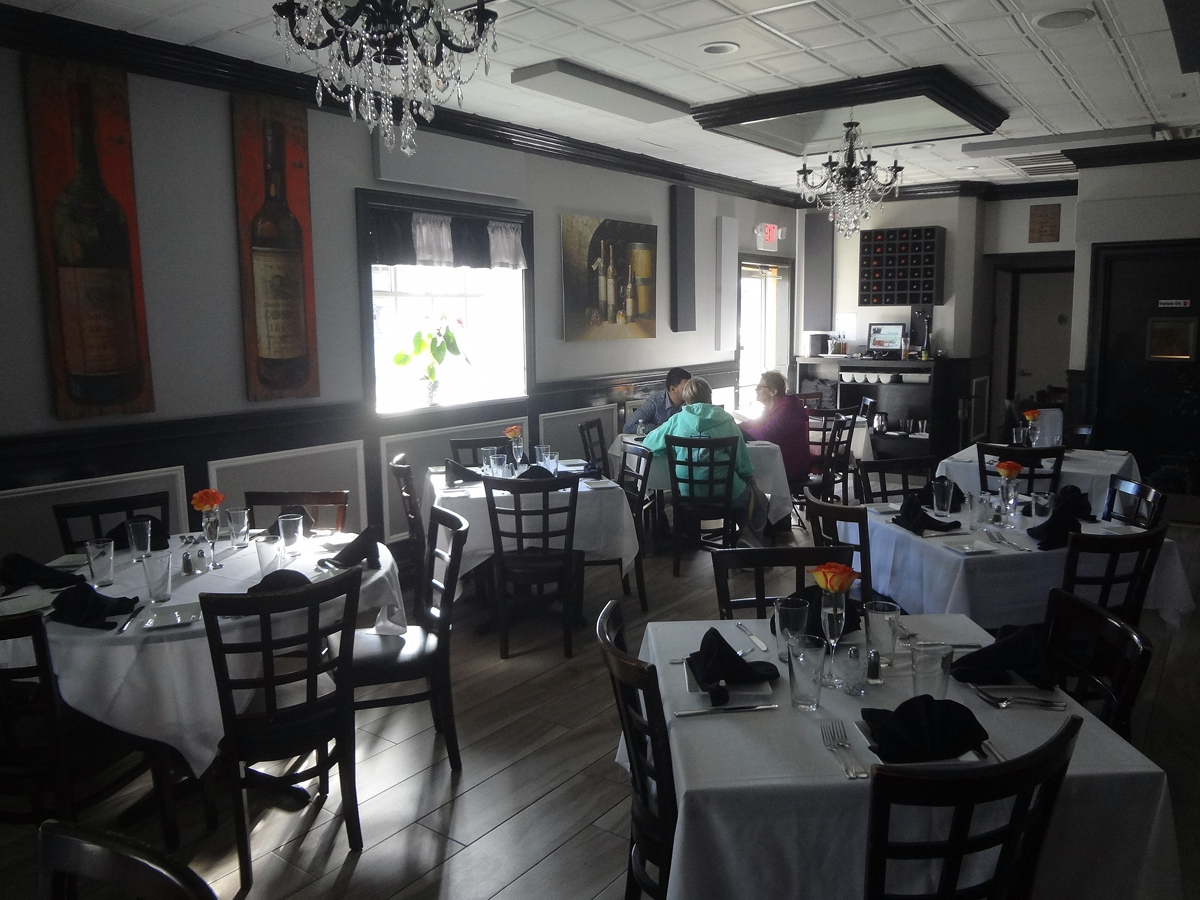 Il Vizio's decor is atmospheric and features rustic, old-world charm. Photo Credit: Chris Boyle
Of course, even the friendliest and most attentive service in the world means absolutely nothing if the food wasn't up to snuff; thankfully, this is where Il Vizio also manages to more than meet the challenge, delivering old-world dishes made with a traditional, yet modern flair.
“We are authentic Italian...there are a lot of places that are ‘American Italian,’ but we try to be ‘Italian-American.’ We try to keep everything as Italian as possible,” Prudente said. “We get our cheeses imported from Italy on a weekly basis, we always use the highest-quality ingredients, and the neighborhood has really responded. After all, my waiters and I can be the best hosts in the world, but if the food isn't what it is, we wouldn't have had the success that we've enjoyed. I’ve worked with my head chef for 15 years, and I can't ask for anyone better. I use the best products, and he cooks them to perfection. That's what sets us apart.”
The son of Italian immigrants, Prudente likes to joke that he was made in Italy, but born in America. And to say that the restaurant business was in his blood would be somewhat of an understatement; he got his start at the tender age of 12 delivering flyers for a local pizza parlor, a position he held for a number of years until he was eventually promoted to actually flipping pies. From there he split his time between the pizza parlor and second job at a catering hall, displaying an impressive work ethic that few young men his age could be bothered with.
“It was about trying to be like an adult...my brothers were older and I had always hung around older kids, and everyone was working and making money, and I didn't want to have to rely on my parents,” he said. “I always found myself in a rush to grow up, in a rush to get to the next thing.” 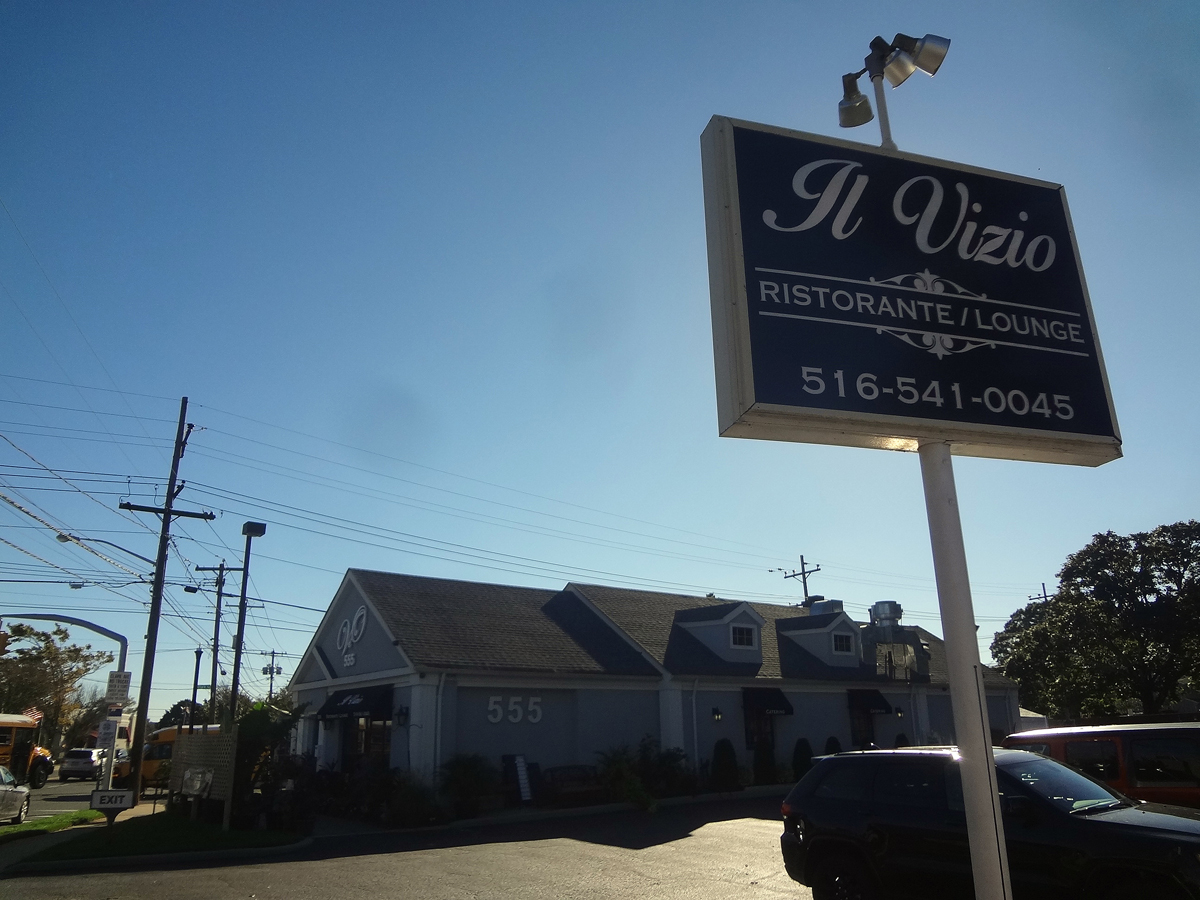 Il Vizio endevors to keep everything as Italian as possible, including importing cheese from Italy on a weekly basis. Photo Credit: Chris Boyle
As he grew older, Prudente continued with his exhausting work schedule, all while putting himself through college and eventually earning a degree in economics. However, it was from there that he decided to take a detour and chase a second ambition of his- becoming a professional soccer player. An avid and high-level player throughout high school and college, Prudente moved to his family's home country, Italy, and joined a professional team.
“At that time I was thinking I would be a professional soccer player, maybe open up a small restaurant in Italy...my economics degree was just a fallback plan, just in case,” he said. “I played about two or three seasons in Italy, it was a really great experience, but unfortunately the money wasn't quite what I was used to at that point, having been used to working full-time since I was 13 or 14 years old.”
It was time to make a decision about his future, he said.
“I was in southern Italy at the time, and there were no jobs there...my parents were totally against me staying there, so I came back home again,” Prudente continued. “I started working two jobs when I got back to the United States, one for Chase Bank and one at a restaurant.” 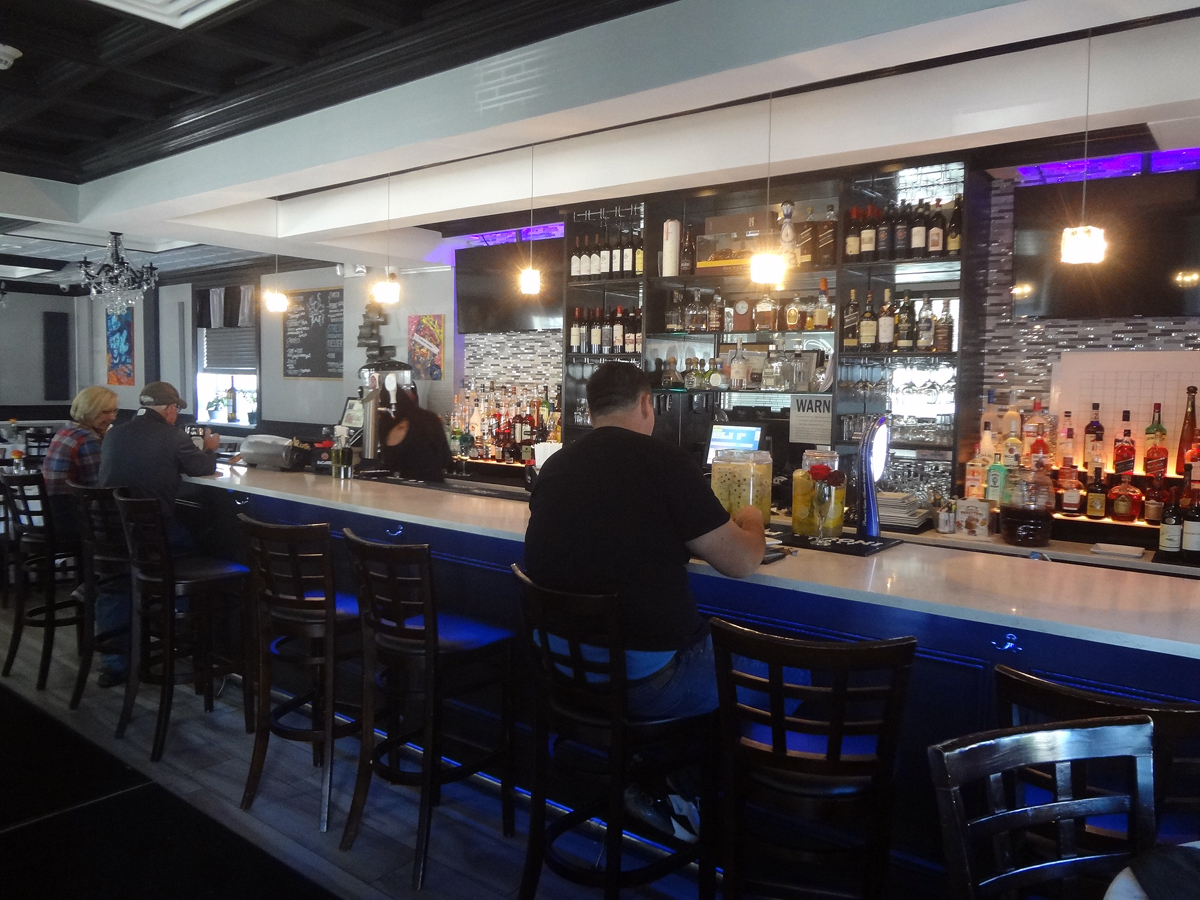 In addition to dinner and lunch, Il Vizio is available for bookings for private parties and catering events. Photo Credit: Chris Boyle
However, after working this grueling schedule for a while, Prudente decided it was time for a change; it was then that he and several of his co-workers at the restaurant left the establishment and struck out on their own, opening their own restaurant in East Meadow.
Prudente - at the tender age of 24 - with a partner founded the first iteration of Il Vizio in East Meadow in 2010, located on Jerusalem Avenue on the border of Bellmore. The restaurant was an instant success, so much so that Prudente said they quickly outgrew that location, prompting him to sell the business and seek a more suitable place. Eventually, he found the right spot on North Broadway in Massapequa in 2015, situated in a building that had been the previous home to a Friendly's franchise restaurant.
“The great parking lot really sold us on the location...we were so handicapped with the parking at our East Meadow location, and this was just so much better,” he said. “Plus, the building itself was much larger and could accommodate more people, and the neighborhood afforded us opportunities to open during lunch, which wasn't really an option in East Meadow. Plus Broadway is a much safer road for pedestrians to cross than Jerusalem Avenue was.” 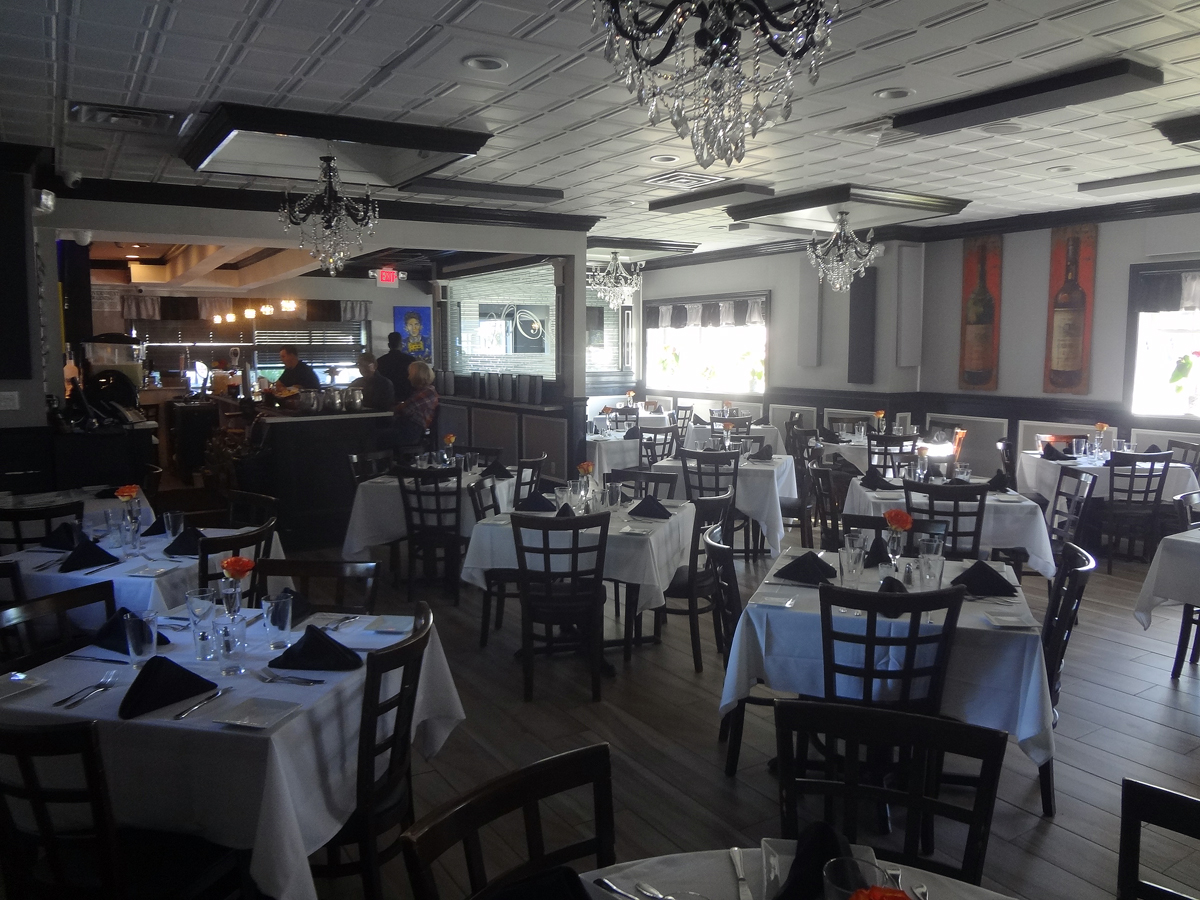 Il Vizio's dining room is cozy yet sophisticated at the same time. Photo Credit: Chris Boyle
Utilizing the skills of his brother, who was conveniently employed as an architect, the former Friendly’s was transformed into an unrecognizable state as the new home of Il Vizio. Inside and out, the restaurant was re-created into an establishment oozing a dark, atmospheric, and rustic charm, managing to be cozy yet sophisticated at the same time. Once renovations were complete, the re-vamped  and improved Il Vizio opened its doors for business in September of 2016, and has enjoyed non-stop success ever since.
With Il Vizio’s status in Massapequa cemented, Prudente notes that he now envisions opening up a second location one day soon.
“It's definitely part of the business plan...we are always looking, but first we want to build up our staff so we don't bite off more than we can chew,” he said. “But we have a very strong foundation now, and we're ready. Possibly by next September, will have something else open. I'm just glad that our foundation is now strong, and I just want to keep it going.”
Il Vizio is open for dinner seven days a week, with additional hours for lunch Monday through Friday. They're also available for bookings for private parties and catering events as well. For more information, please visit www.ilvizio555.com.