Dozens Gather in Show of Unity. 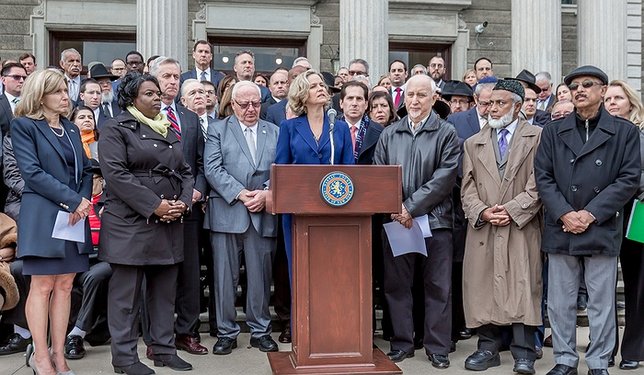 Nassau County Executive Laura Curran speaking in the wake of the shooting at the Tree of Life Synagogue in Pittsburgh.

Mineola, NY - October 30, 2018 - Nassau County Executive Laura Curran, joined today by elected officials including Congressman Thomas Suozzi , Senators Todd Kaminsky, Elaine Phillips and John Brooks, District Attorney Madeline Singas, Comptroller Jack Schnirman, Presiding Officer Richard Nicolello, Minority Leader Kevan Abrahams, Legislator Arnold Drucker; area clergy members including Rabbi Jay Rosenbaum from Temple Israel in Lawrence, Rabbi Art Vernon from Congregation Shaaray Shalom in West Hempstead, Father Walter Kedjierski from the Diocese of Rockville Centre, Rabbi Kenny Hain of Beth Sholom in Lawrence; and community leaders including Isma Chaudhry from the Islamic Center of Long Island, spoke out against anti-Semitism, hateful speech and acts of violence. Dozens of supporters stood in solidarity and unity in the wake of the deadly shooting at the Tree of Life Synagogue in Pittsburgh.
County Executive Curran called for all Nassau County residents to stand together in the memory of victims and end the hateful rhetoric that continues to fuel deadly incidents.The gathering, heldtoday on the steps of the Theodore Roosevelt Legislative and Executive Building in Mineola, offered support for those affected by the violence in Pennsylvania.
“Today, we all stand in solidarity with our Jewish community,” said Curran. “We are here to say we are together. We are with you. Your house of worship should always be a place of safe refuge, where community, love and faith are the focus. We will support our vibrant Jewish Community in every way.
“The health and safety of our residents is always our number one priority,” said Curran. “In response to the shooting, our police department stepped up patrols and performed a public safety analysis throughout the county. We will continue to be vigilant in the wake of this tragedy.”
At the close of today’s gathering, Nassau County Police Commissioner Patrick Ryder provided a security update on efforts to secure the safety of our Houses of Worship.
“We continue to urge our residents to report any incidents: If you see something, say something,”said Curran.