A special event was held last Thursday to honor the veteran. 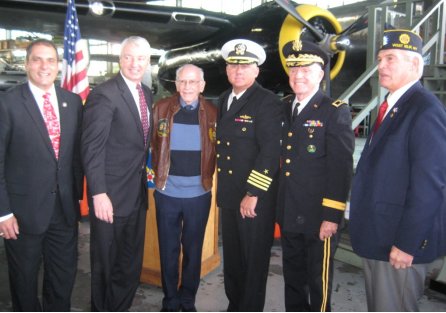 Farmingdale, NY - November 26, 2013 - On Thursday November 21, 2013 Legislator Thomas Barraga (R-West Islip) held an event at the American Air Power Museum in Farmingdale honoring WWII veteran and hero Frank McLoughlin for his acts of heroism during his time in the United States Army Air Corps. S/Sgt Frank McLoughlin was a turret gunner on a B-24 Liberator Bomber who flew over 50 missions in the Pacific theater. On one mission in particular S/Sgt Frank McLoughlin was responsible for downing two Japanese fighter planes while returning from a bombing mission on Japanese held Truk Island in the Philippines in May of 1944. Originally, on this mission 36 bombers were to meet at a rendezvous point just short of Truk Island. However, shortly after take-off the bombers encountered an unexpected severe storm. Once reaching the rendezvous point only 6 bombers appeared. Frank’s bomber proceeded on to Truk Island and successfully dropped its bombs. On their departure from the target area they were attacked by a group of Japanese fighter planes. One fighter came directly from the nose - high position making a prime target for Frank’s upper turret guns. Frank downed the Japanese fighter and all 6 bombers returned safely back to base. Frank McLoughlin is an outstanding American hero who served his Country proudly.