A suspect has been arrested in one robbery, but three remain on the loose after another. 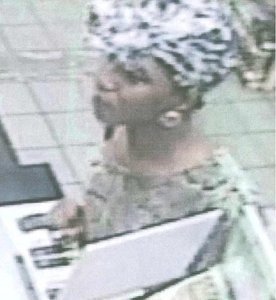 Update 5:40 PM: The Riverhead larceny suspects in fact robbed an employee of C. Wonder, not Kenneth Cole as previously reported.

Fire and Burglary in Sunrise Mall
On June 30th of this year, arson and bomb squad detectives were called into the Forever 21 at the Sunrise Mall in Massapequa. The source of the fire was evidently an employee who hid himself in the store’s stock room as managers locked up for the night, waited for all other employees to leave, then pilfered an undisclosed sum from the shop’s cash box. Before departing, the employee set fire to a clothing rack; fortunately the blaze was extinguished by the mall’s sprinkler system and nobody was harmed in the incident.

Denzel Jones, 23, of Oakley Avenue in Massapequa is suspected of having been the arsonist. He remained at large until Tuesday, October 29th, when Seventh Squad detectives apprehended him in Staten Island. Charged with 2nd Degree Arson, 3rd Degree Burglary, and 1st Degree Reckless Endangerment, Jones is being arraigned in Hempstead’s First District Court today.

Grand Larceny in Riverhead C. Wonder
In an unrelated incident, three suspects are wanted in relation to a theft which occurred at the C. Wonder store located in Riverhead. On October 7th, two men and a woman entered the store around 5 o’clock in the evening. While two of the suspects distracted a female worker, one of the men entered an employees-only area and swiped a purse containing personal papers, an iPhone, and a debit card.

The victim’s card has since been used to purchase $75 worth of merchandise at gas station in Medford, and the Riverhead Police Department is now asking for the public’s assistance in tracking down the robbers. The female suspect is described as a black, 5’5”, and between 25 and 32 years of age; she was wearing blue jeans and a white and blue bandana during the theft. One of the male suspects is described as tall and black, having worn a red shirt, and the one who took the pocketbook is said to have also been black and wearing a green shirt with the number 3 printed on it.

A cash reward of up to $5,000 is being offered for information which leads to an arrest. Anyone with information about the crime is asked to call Suffolk Crime Stoppers at 1-800-220-TIPS.