Christopher James of Binghamton, 26, was convicted for the murder of Kevin Pierson, Sini says. 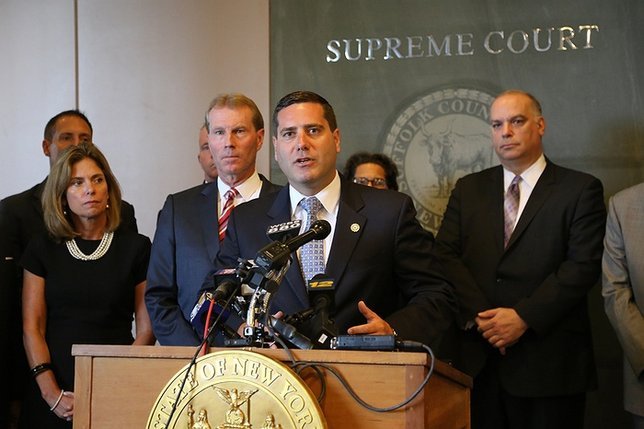 Riverhead, NY - October 29, 2018 - Suffolk County District Attorney Timothy D. Sini announced the trial conviction of a man for stabbing another man to death in the victim’s home in Central Islip in 2010.
Christopher James, 26, of Binghamton, was convicted by a jury on Friday, October 26 of Murder in the Second Degree, an A felony, for the murder of Kevin Pierson, 38, of Central Islip, on February 10, 2010.
“As the defendant told the jury himself, ‘Evil lives,’ but in Mr. James’ case, it will now hopefully spend its life in prison,” District Attorney Sini said. “Despite his antics during this trial, the jury saw the truth – that he stabbed Kevin Pierson to death in Kevin’s home eight years ago. Through the incredible work and determination of Assistant District Attorney Beth Creighton and the Suffolk County Police Department’s Homicide Squad, justice prevailed.”
James faces a maximum sentence of 25 years to life in prison. He is scheduled to be sentenced by Suffolk County Supreme Court Justice Timothy Mazzei on November 27.
On February 10, 2010, James stabbed Pierson nine times, causing his death, in Pierson’s apartment on Maplewing Drive. Pierson’s body was found in his bedroom by police on February 12.
Cell phone data revealed that James and Pierson were both in Pierson’s apartment on the day of the murder. Cell phone records also revealed that James and Pierson had exchanged text messages planning to meet and had spoken on the phone earlier that day.
In 2013, James was convicted of an unrelated crime in Brooklyn and was required to provide a DNA sample. Using the FBI’s Combined DNA Index System (CODIS), detectives determined that James’ DNA matched biological evidence recovered from the crime scene.
James’ DNA was found on the collar and cuffs of a jacket and on a t-shirt recovered from the victim’s apartment. It was also found on a knife sheath in the apartment believed to have been on the murder weapon. The murder weapon was not recovered.
On April 24, 2016, detectives from the Suffolk County Police Department’s Homicide Squad traveled to Binghamton to arrest James.
At the time of his arrest, James stated to detectives, “How can I be charged with murder when no weapon was recovered?” The fact that the murder weapon had not been recovered had not been publicly disclosed.
Additional evidence included a sock-clad foot impression in blood on the floor of the apartment, which was found to have matched James’ footprint, according to a forensic footwear impression expert. The expert also testified during trial that the impression had to have been made after the murder and could therefore not belong to the victim.
The trial began on October 15. The jury deliberated for approximately two hours before returning a verdict of guilty.
James is representing himself in this case with assistance from a court-appointed legal adviser.
This case is being prosecuted by Assistant District Attorney Elizabeth Creighton, of the Homicide Bureau.