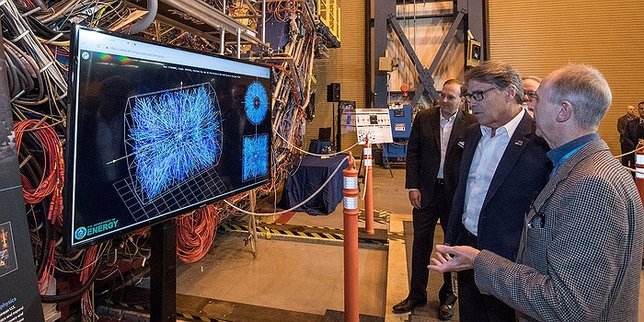 Photo by: U.S. Department of Energy

Brookhaven, NY - October 29, 2018 - Recently, Congressman Lee Zeldin (R, NY-1) and Secretary of Energy Rick Perry spent the day visiting Brookhaven National Laboratory (BNL), a cutting edge research institution funded largely by the Department of Energy Office of Science. During the tour, Rep. Zeldin and Secretary Perry visited the National Synchrotron Light Source II (NSLS II), Relativistic Heavy Ion Collider (RHIC) and Center for Functional Nanomaterials.
“I thank Secretary Perry and his entire team for traveling to the First Congressional District of New York to tour Brookhaven National Laboratory and see firsthand all of the amazing work they are doing there. I would also like to thank BNL Director Doon Gibbs and his team for their exceptional work today and everyday. For decades, Brookhaven National Lab has pioneered the future of clean and green energy, medical and cancer research, astrophysics and encouraged and cultivated the minds of future generations of scientists,” said Congressman Zeldin. “Supporting their important research is of the utmost importance for not only our area’s economy and the future of scientific research on Long Island, but for the scientific advancement of our entire nation and world.”
Since coming to Congress, Rep. Zeldin has been a stalwart advocate for BNL. This year, Rep. Zeldin secured key victories and vital funding for BNL with House passage of the Conference Report to Accompany the Energy and Water, Legislative Branch, and Military Construction and Veterans Affairs Appropriations Act (H.R. 5895), which: