The construction phase of a multi-faceted saltmarsh resiliency project will begin at Wertheim National Wildlife Refuge (NWR) on Tuesday, November 1, 2016. 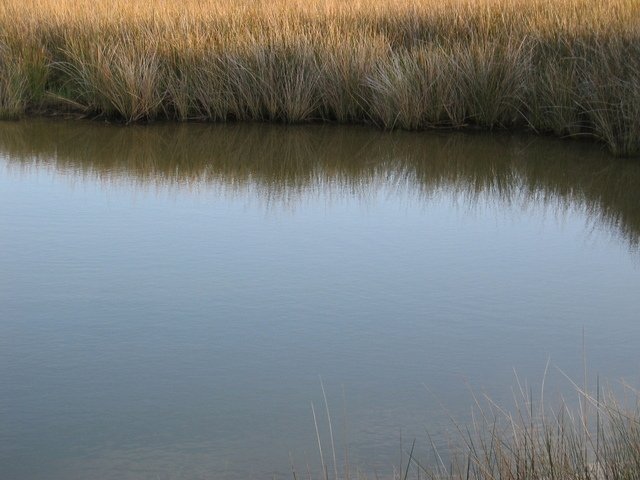 The work is expected to continue through April 2017.

Shirley, NY - October 28, 2016 - The construction phase of a multi-faceted saltmarsh resiliency project will begin at Wertheim National Wildlife Refuge (NWR) on Tuesday, November 1, 2016. Government contractors will work on the marsh at the south end of the Carmans River on both the east and west side. They will utilize specialized low ground pressure equipment to dig channels to improve tidal exchange on the marsh surface. Legacy mosquito ditches will also be filled using a combination of excavated marsh sediment and coir logs made from coconut fiber. The work is expected to continue through April 2017.

Throughout the construction period, refuge neighbors may notice work crews and equipment operating in the vicinity of Smith and Hay Roads in Shirley, and Meadow Lane in Brookhaven on a regular basis. Refuge biologists will closely monitor the project to ensure healthy marsh is not inadvertently damaged. The completed project will restore the natural tidal flow in currently degraded salt marshes, promote native vegetation, reduce mosquito production, and create valuable wildlife habitat. Restoration efforts will also help protect communities located near the refuge from coastal flooding during future storm events and the impacts of rising sea-levels.

In October 2013, the U.S. Fish and Wildlife Service (Service) received Congressional funding to restore and enhance approximately 567 acres of salt marsh habitat impacted by Hurricane Sandy. The Wertheim coastal resiliency project is part of a larger restoration effort to restore marsh habitats at three units of the Long Island National Wildlife Refuge Complex. Restoration plans for the Seatuck NWR and Lido Beach Wildlife Management Area are in the final review stages and construction at those sites will start later this winter.

Wertheim NWR is located in Shirley, NY on the south shore of Long Island and was acquired in 1947 as a donation from Cecile and Maurice Wertheim. The refuge consists of 2,572 acres bordering the Great South Bay, and is separated from the Atlantic Ocean by Fire Island. Wertheim NWR hosts more than 200 species of birds, and serves as an oasis for wildlife in a heavily developed urban area. Uplands make up about two-thirds of Wertheim NWR, including grassland, shrubland, and woodland habitats. Wetland habitats comprise the other third of the refuge, of which saltmarshes are the most common. For additional information, please view our website or contact the Long Island National Wildlife Refuge Complex Office at 631-286-0485.

The mission of the U.S. Fish and Wildlife Service is working with others to conserve, protect and enhance fish, wildlife, plants and their habitats for the continuing benefit of the American people. We are both a leader and trusted partner in fish and wildlife conservation, known for our scientific excellence, stewardship of lands and natural resources, dedicated professionals and commitment to public service. For more information on our work and the people who make it happen, visit www.fws.gov.