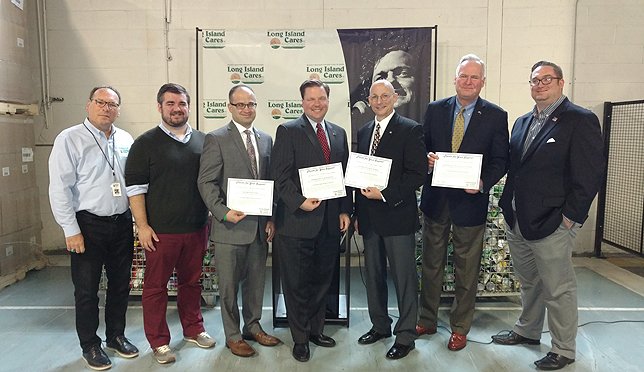 Long Island, NY - October 26, 2017 - On the heels of the tremendously successful Summer Food Drive to End Hunger sponsored by Long Island Cares, Inc. and King Kullen Supermarkets, Assemblyman Dean Murray (R,C,I-East Patchogue) joined his legislative colleagues at a press conference yesterday to thank all those involved and local residents who selflessly donated to their efforts. Several Republican assembly members representing various regions of Long Island hosted food drives in their local communities at different points throughout the summer season.
"I am so proud of the efforts of Long Island Cares, Inc., my Long Island colleagues in the Assembly, King Kullen Supermarkets and most of all my constituents in the Shirley, Mastic and Mastic Beach areas who really dug deep to donate thousand of pounds of food to those in need," said Murray.
Total donations were recorded at 20,265 pounds of food that will be distributed to those in need through member agencies of Long Island Cares, Inc. According to officials at Long Island Cares, approximately 316,000 people on Long Island receive emergency food each year. Of those, 39 percent are children under 18 years old.
Assemblyman Dean Murray represents the 3rd District, which includes portions of Brookhaven, Medford, and Mastic Beach in Suffolk County. For more information, visit Assemblyman Murray’s Official Website.