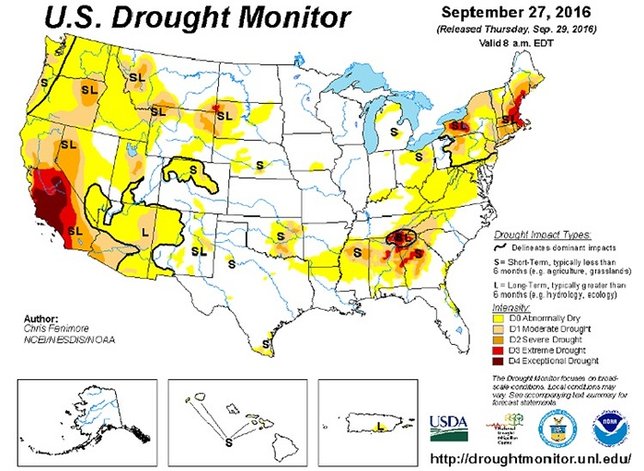 Albany, NY - September 30, 2016 - Governor Andrew M. Cuomo today announced that four additional Upstate counties have been designated as a natural disaster area by the federal government as a result of this summer's drought. Jefferson, Lewis, Herkimer, and St. Lawrence counties have been added due to their reported crop losses, bringing the total number of counties in New York State severely impacted by the extreme dry conditions to 51.

"A strong agricultural industry is critical to this state's economy and this year's extended period of hot, dry weather has created significant challenges for New York farmers," Governor Cuomo said. "Stretching from the farthest corners of Western New York to the North Country and south to Long Island, our farms are seeing unprecedented crop damage. By designating counties as disaster areas, our producers will have access to the resources needed to recover and boost business again." 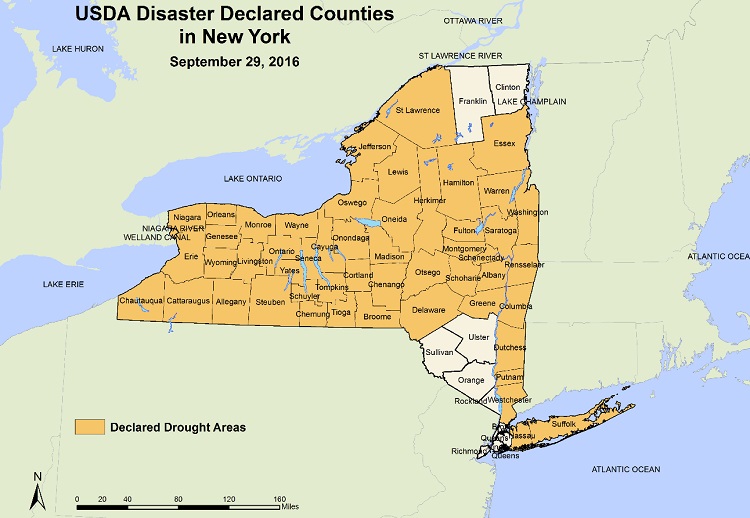 The disaster declaration allows eligible farmers to access assistance, including emergency loans, from the United States Department of Agriculture Farm Service Agency. A map of the affected counties declared as disaster areas is available here.

Disaster declaration is based on reporting of crop loss to the federal Farm Service Agency and a D3 designation by the U.S. Drought Monitor. At the end of August, the Governor announced that the federal government had declared 15 counties as primary natural disaster areas and an additional nine counties as contiguous disaster counties as a result of the drought conditions.

In August, the Governor announced State Agriculture Commissioner Richard A. Ball, state lawmakers and other farm leaders would be conducting on-site assessments of farms affected by the drought, while the state works closely with Cornell University expert hydrologists and climate professors to help understand and study the outlook for recovery.

Following the Governor's announcement, Commissioner Ball toured a number of dairy, vegetable, Christmas tree farms, and vineyards with representatives from the New York Farm Bureau, Cornell Cooperative Extension and the regional FSA offices, along with other state leaders. Tours were conducted in the North Country, Central New York, Southern Tier, Finger Lakes and Western New York regions. Losses are estimated to range from 30 to 60 percent, depending on the crop, and farmers are challenged with additional costs associated with irrigation and hauling water.

The primary and contiguous counties included under this designation are:

Disaster Declaration
A disaster designation makes farm operators in primary counties and those counties contiguous eligible to be considered for emergency loans from the FSA, provided eligibility requirements are met. Farmers in eligible counties have eight months from the date of the disaster declaration to apply for emergency loans. The Farm Service Agency considers each emergency loan application based on the extent of production losses on the farm, and the security and repayment ability of the operator.

The guide provides information on the USDA Disaster Declaration and FSA emergency loans. It also links farmers to weekly crop progress and condition reports and resources from Cornell Cooperative Extension, NY FarmNet, and other organizations related to preventing, preparing for and recovering from emergencies and disasters, increasing the productivity and financial stability of a farming operation, and crop insurance.

The resource guide will be updated as new information becomes available and can be found here.

There are also other numerous resources available for farmers affected by the drought through Cornell Cooperative Extension, the Cornell EDEN program, and NY FarmNet to assist with forage management and programs and projects to better prepare the state for future drought.

State Commissioner Richard A. Ball said, "I saw firsthand how widespread and devastating the drought has been on farms. We haven't seen conditions this severe in decades and it is clear our producers and growers will see crop loss of up to 50 and 60 percent in some regions. Forage, hay, corn, and grain crops to feed animals over the winter are affected, and farmers are facing additional costs from having to irrigate and haul water, so it's critical that these counties be declared as disaster areas so they can apply for the assistance they may need. We will continue to work with our partners in monitoring the drought situation and its effect on New York farms in these and our remaining counties across the State."

Senate Agriculture Committee Chair Senator Patty Ritchie said, "While recent weeks have brought increased rainfall to the region I represent, the troubles farmers are facing due to this summer’s drought—namely crop losses and increased costs—are far from over. In visiting farms and talking with farmers throughout the past couple months, I've seen and heard firsthand the impact the dry weather has had. I'm pleased to see additional counties designated as natural disaster areas, and would like to thank Governor Cuomo and Commissioner Ball for their work to help our hardworking farmers receive the support they need to rebound from the drought."

Assembly Agriculture Committee Chair Bill Magee said, "I appreciate the efforts of Governor Cuomo and Commissioner Ball, in cooperation with the US Farm Service Agency, to extend eligibility of drought relief by expanding the disaster declaration. This help for farmers will aid in recovery efforts and keep our farms on track for future production, mitigating the effects of what was, in some counties, severe to extreme drought conditions."

New York Farm Bureau President Dean Norton said, "This year's drought has been far reaching. I saw it firsthand as I visited a number of farms with Commissioner Ball and legislative leaders on a recent tour of hard hit areas. The additional counties added to the disaster declaration will open up needed assistance for farms that suffered crop loss, and New York Farm Bureau will continue to work with the Governor and his administration along with federal officials to secure the help our family farms need to weather this drought."

The New York State Department of Agriculture and Markets, along with its Soil and Water Conservation Districts, Farm Bureau, Cornell Cooperative Extension and the Cornell EDEN program, recommend that farmers affected by the drought should continue to document their conditions (pictures and video), and any losses. Farmers can also file a CCC- 576 (Notice of Loss) with their local USDA Farm Service Agency.