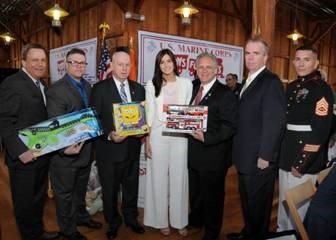 “Each year, the Major and his Marines raise just under $1 million in cash and toys-much of which comes from hundreds of corporate donors, such as 7-11, Toys R Us, Hess, Hasbro, Disney, Macys, the UPS store, and Build-a-Bear Workshop; as well as from volunteer fire departments and Police departments,” stated County Executive Mangano. “Toys for Tots also honors fallen police officers, and works closely with Wounded Warriors. On behalf of Nassau County’s 1.3 million residents, I thank you for your amazing work.”

County Executive Mangano was honored as he presented 2 year old Tommy Onorato of Franklin Square with a Citation for bravery. Tommy has suffered from Microvillus Inclusion disease since birth, and as a result Tommy is not allowed to eat any food by mouth. It is believed that Tommy is only one of thirty people currently diagnosed with Microvillus Inclusion disease in the United States. This year Toys for Tots named Tommy a Junior Vice-Chairman and is hoping that the publicity generated through Toys for Tots will spread awareness about Tommy’s condition and his TKO Strong Foundation.

Parents Tom and Melissa created the TKO Strong Foundation after Thomas Kevin Onorato was diagnosed in 2013. TKO Strong Foundation, Inc. is a non-profit, article 501(c)(3) corporation, devoted to supporting individuals suffering from intestinal failure due to rare disease, through raising funds for research. When an individual is in intestinal failure they receive their nutrients and calories intravenously through total parenteral nutrition (TPN). TPN is given through a catheter placed in the arm, groin, neck or chest. Patients on TPN may live for many years, but long-term use of TPN can result in serious complications, such as bone disorders, central venous catheter infections and liver disease. To learn more about Tommy and the TKO Strong Foundation visit here.

To support the Toys for Tots drive, County Executive Mangano reminds residents that they can donate a new, unwrapped toy by December 20th by placing it in one of the drop off boxes located in the lobby of Nassau County buildings. Nassau County residents can call 571-6000 to find the drop off location closest to you.