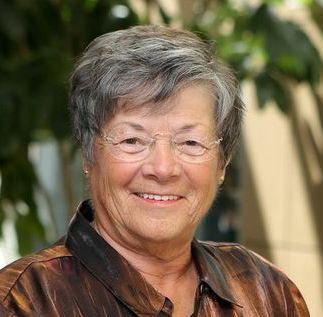 Lackmann Culinary Services, formerly Lackmann Food Service, was founded in 1966 by Thomas F. Lackmann. Tom slowly grew his business by gaining the trust and loyalty of his clients, the first being Nassau Community College. In 1974, Lackmann secured a multi-million dollar contract with Adelphi University, which remains Lackmann’s longest tenured account. The company expanded its services to cafes in New York City and eventually began operating outside the New York area. In 1992, the company received the Silver Plate Award for being the best food service company in America, its success being due to its focus on quality, excellent service, and creativity. In 2009, Lackmann was acquired by Compass Group, a leader in foodservice management and support services.

Angela M. Jaggar ’62, M.A. ’65, a member of the Adelphi University Board of Trustees, received her bachelor’s and master’s degrees in education from Adelphi and Ph.D. from New York University (NYU). Dr. Jaggar entered the field of education as an elementary school teacher in Plainview, NY.  She spent the remainder of her career, more than 30 years, at New York University, where she taught classes and conducted research on children’s language and literacy development. Dr. Jaggar has held many leadership roles including co-founder of NYU’s Reading Recovery Project, which she co-directed for 10 years. Among her publications include the best-selling Observing the Language Learner, co-published in 1985 by the National Council of Teachers of English and the International Reading Association. With her husband, Dr. Jaggar established the Angela and Scott Jaggar Foundation, which supports education, the performing arts, and social services. In May, 2011, Dr. Jaggar received the Distinguished Alumna Award from The NYU Steinhardt School of Culture, Education, and Human Development, which recognizes exceptional individuals whose achievements in his or her profession, vocation, social and/or cultural endeavors are of extraordinary merit.

Robert E. Hartwell’s career at Adelphi began nearly 26 years ago when he first joined the Athletic Department. He retired in 2013 as the vice president and director of Intercollegiate Athletics and Recreation. During his time at Adelphi, Mr. Hartwell helped bring about many of the accomplishments of his department. The Adelphi Panthers earned 10 NCAA Championships, 10 NCAA Regional Championships, more than 100 NCAA appearances and countless conference titles. Mr. Harwell’s support for women in athletics led to the addition of four women’s programs including volleyball, lacrosse, bowling, and field hockey.  Under his direction, the athletic program gave back more than10,000 hours of service to the youth in our region, cultivated the leadership potential of more than 5,000 student- athletes, and extended the University's connection to our alumni around the globe. He revived Adelphi’s Athletic Hall of Fame and the Annual Hall of Fame dinner. The “Cans for Cancer” program, initiated in 2003, is also credited to Mr. Hartwell. Through the collection of cans by student-athletes, the department has raised $50,000 for Winthrop University Medical Center’s Cancer Center for Kids. In Hartwell's final year in the position, Adelphi was awarded the 2012-13 Northeast-10 Conference President's Cup for its overall excellence in athletics, presented annually to the institution that collects the most cumulative points based on standings in the regular season from all of its programs competing in league championships.

Two shotguns starts are scheduled at 7:15 a.m. and 12:30 p.m. Proceeds of the event will benefit student athletic scholarships. Last year’s event raised $125,000 in scholarship support. Nearly 160 alumni and friends came out to enjoy the event and contribute to its success.

Co-chairs of the event this year are John P. Finnerty M.S. ’77 of WJM Associates, Inc. and Stephen M. Wirth ’70 of the New York Sports and Physical Therapy Institute.

For more information, to make a golf reservation, or to make a contribution toward student athletic scholarships, please contact Christine Spina, assistant director of special events, at (516) 877-3155 or cpsina@adelphi.edu.