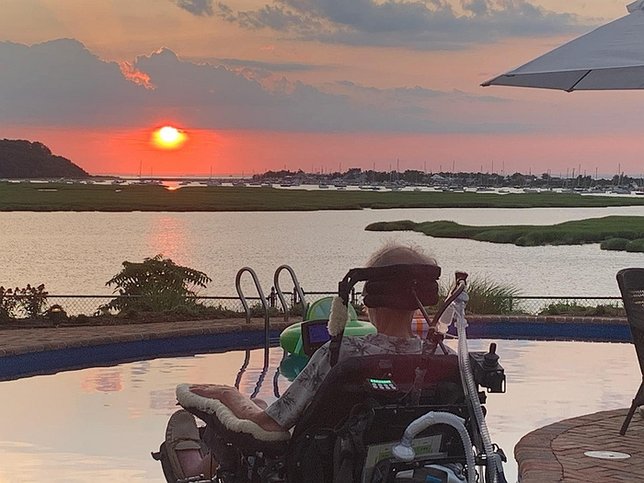 Chris Pendergast, the teacher from Northport School District and Miller Place resident, who brought attention to amyotrophic lateral sclerosis (ALS) after being diagnosed with the disease 28 years ago, died today at his home.

He was diagnosed in October 1993 and a few years later he started his charity, ALS Ride For Life, to raise money for treatment of patients and research into a cure for ALS, also known as Lou Gehrig’s Disease.

Pendergast brought attention to the plight of ALS patients with his first Ride For Life event in 1998. He traveled from Yankee Stadium to Washington DC in his wheelchair, a trip that took him 15 days. Since then, every year in May during ALS Awareness Month, ALS patients ride their power wheelchairs along the highways across Long Island to Manhattan.

The Neuromuscular Disease and ALS Center at Stony Brook Hospital was named after Pendergast in 2011. The unit is an ALS Association Certified Center, meaning that The ALS Association has ensured that the center adheres to strict guidelines of specialized care, based on best practices.

Awareness for the disease exploded in 2014 with the ALS Ice Bucket Challenge viral phenomenon that gripped the world and brought Lou Gehrigh’s Disease to the forefront. Incredibly, the campaign helped The ALS Association raise over $114 million for research and care.

Pendergast is also an author. He penned a memoir in 2019 about his experiences titled "Blink Spoken Here."

On Monday, Pendergast began home Hospice care and he died on Wednesday.

“The Ride family is heartbroken to let you know that our Founder and President Christopher Pendergast has recently begun home hospice care,” The ALS Ride For Life wrote on their Facebook page. “Please keep Chris and his family in your thoughts and prayers.”

In reflecting on the disease and his part in raising awareness and funds, Pendergast wrote about his feelings for the Port Times Record, a local newspaper.

“Along the road with ALS, I witnessed amazing things and met incredible people,” he said. “I was able to participate in wonderful experiences which otherwise would not have happened.”