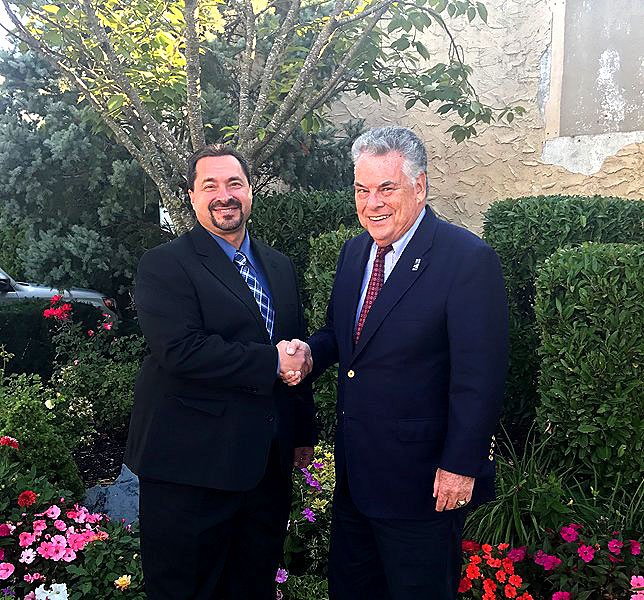 Photo by: Friends of Chris Madden.

Long Island, NY - October 21, 2017 - Today, October 20, 2017, the campaign for Chris Madden, Candidate for Suffolk Legislature’s District 15, has announced it has received the endorsement of Republican Congressman Peter King, current Representative for New York's 2nd congressional district. King represents the South Shore of Long Island.
"I am very proud to endorse Chris Madden for Suffolk Legislature District 15," said Congressman Peter King, standing behind the Republican businessman in his run for office. Chris’s long years of community involvement and his business experience make him the perfect man for the job.
“After meeting with Chris I know he is going to do all he can for our communities by exposing wasteful spending and doing all he can to destroy MS-13” King says.
Congressman King has never endorsed a candidate in Suffolk Legislative District 15 in the past.
Madden’s opponent is Presiding Officer DuWayne Gregory who fully supports the red light camera program and has introduced new legislation that will double fees on all violations which tax payers will have to pay if found guilty or not.
Madden is against the red light camera program and the excess fees “We have to stop the Suffolk County government from stealing our hard earned money. They are making it simply impossible to support and raise a family in Suffolk County” Madden says.
“We need full disclosure and complete transparency in all aspects of government” Madden added.
Vote for Chris Madden, Row B, November 7, 2017.
The 15th Legislative District is located in the southwestern-most portion of Suffolk County. It is bounded on the west by the Nassau/Suffolk County line and on the north by the Babylon/Huntington Town line. It’s communities include Wheatley Heights, Wyandanch, North Amityville, Amityville Village, Copiague, parts of North Lindenhurst, West Babylon and North Babylon, and the portion of Farmingdale which lies in Suffolk County.
For more information please visit ElectChrisMadden.com.