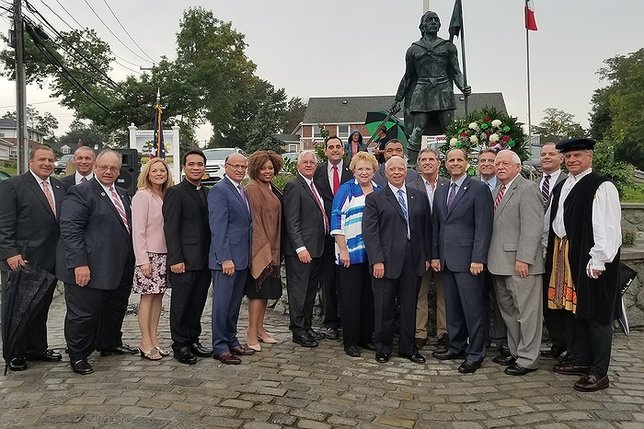 Huntington, NY - October 8, 2018 - Huntington Supervisor Chad A. Lupinacci, Town Councilmembers Eugene Cook, Joan Cergol, and Ed Smyth, Town Clerk Jo-Ann Raia, Tax Receiver Jillian Guthman, State Assemblyman Steve Stern, County Comptroller John Kennedy, and County Legislator William Spencer joined Order Sons and Daughters of Italy in America New York Grand Lodge State President Robert Ferrito, State 1st Vice President Anthony Naccarato, State Deputy Keith Wilson, past National President Joseph DiTrapani, National Treasurer Thomas Lupo, members from across Long Island, and a Christopher Columbus impersonator for a wreath laying and Italian flag-raising ceremony at the Christopher Columbus Statue in Huntington Village on Thursday, October 4 to kick off Italian-American Heritage Month festivities, including the 20th Annual Long Island Columbus Day Parade taking place Sunday, October 7 in Huntington Village.
OSDIA New York State Deputy Keith Wilson, also Parade Chairman, served as master of ceremonies, opening the event with an invocation from Father Noel Sixon from Saint Patrick’s Church in Huntington, who blessed the statue, wreath and all in attendance.
"This statue has served as a gateway to Huntington Village for over 40 years, it was commissioned by Sam Albicocco, a Huntington resident who was the uncle of the Town’s Director of General Services, Andre Sorrentino, who is responsible for the beautification of the surrounding landscaping," said Supervisor Chad A. Lupinacci. "Albicocco purchased the land for the statue at his own cost. The statue was financed with contributions from hundreds of Long Islanders, also proud of their Italian-American heritage, and in 1994 Trustees of the Sam Albicocco-Christopher Columbus Foundation transferred this land and the statue that sits upon it to the Town of Huntington."
Lupinacci assured those in attendance that the statue was “here to stay in Huntington, standing taller, and larger, with broader shoulders,” and encouraged residents to wear their “green, white and red” on Sunday, for the 20th Annual Long Island Columbus Day Parade, of which he will serve as a Co-Grand Marshal, along with NYS OSDIA President Robert M. Ferrito, News 12 Anchor Antoinette Biordi, and Italian media personality Dr. Vito DeSimone, Ph.D.
Suffolk County Comptroller John Kennedy, member of the OSDIA Dr. Vincenzo Sellaro Lodge #2319 along with his wife, Suffolk County Legislator Leslie Kennedy stated: “It’s an honor to be here, particularly as a past Grand Marshal for this great parade,” as he noted the importance of honoring the heritage and importance of Columbus in Suffolk County and the nation at large.  The tradition of the Long Island Columbus Day Parade started in his hometown, East Northport, in 1969. At the time, it was the first Columbus Day Parade in Suffolk County in 31 years.
President Domenica Diana Grauer of the OSDIA Arturo Toscanini Lodge #2107 and Mary Naccarato of the OSDIA Giuseppe Verdi Lodge #2163 then presented a bouquet of flowers to NYS OSDIA First Lady Lina Ferrito on behalf of the Parade Committee.
Suffolk County Legislator William Spencer offered quick words of congratulations, well-received by the crowd, as the rain came down at the outdoor ceremony: “Thank you, it’s a privilege to be here, congratulations and God bless you all.”
Representing the National Foundation, past OSDIA National President Joseph DiTrapani of the Per Sempre Lodge #2344 said, “Let’s enjoy this evening, it’s a great day and a great week for our Sons of Italy and our Italian heritage,” as he offered best wishes from all members across the country.
On behalf of OSDIA National President Vera Girolami, National Treasurer Thomas Lupo offered well wishes: “I bring you greetings from National President Girolami and she wishes you the best in celebrating this very important weekend to all Italian-Americans.”
OSDIA State President Robert Ferrito thanked all in attendance for joining in the ceremonial “kicking off” of Columbus Day Weekend, stating: “We must recognize that Columbus was a great navigator, he brought Christianity to the New World, and he should be recognized for his accomplishments, discovering a new route to America, bringing many individuals behind him – scientists, mathematicians; artists and poets – who made this country the great country it is today,” as he went on to congratulate each of the elected officials in attendance for standing strong in celebrating Columbus' accomplishments.
State Deputy Wilson thanked all in attendance for taking part in the celebration and called for the Italian flag to be raised, which will remain flying for all of Italian-American Heritage Month, and the wreath to be placed at the base of the Columbus statue.
The Annual New York Grand Lodge, Order Sons and Daughters of Italy in America, Long Island Columbus Day Parade will step off in Huntington on Sunday October 7, 2018. Many members of the NYS OSDIA from across Long Island will join in the festivities marking the organization’s 113th anniversary.
The event provides the ideal backdrop to celebrate Italian heritage, culture and the vast contributions made in the country by people of Italian ancestry. Green, red and white will be the colors of the day as spectators are sure to revel in Italian-American pride, while taking in the many authentic Italian costumes and listening to the talented high school marching bands.  The theme for this year’s parade is Columbus … The Legacy Continues … 2018!
Members of over 24 lodges in Nassau and Suffolk will be holding their banners and marching with pride during the parade, which coincides with the annual Long Island Fall festival at Heckscher State park. The Town of Huntington and the Huntington Township Chamber of Commerce host the Parade.
Kicking off at 12 noon, the 1.5-mile parade route will be take place on Main Street in Huntington Village, starting at the intersection of Park Avenue and West Main Street and continuing to West Neck Road and West Main Street.
Several high school marching bands will entertain the crowd with their musical performances including East Meadow High School, W.T. Trespar Clarke High School, Walt Whitman High School, Islip High School, Deer Park High School and others.